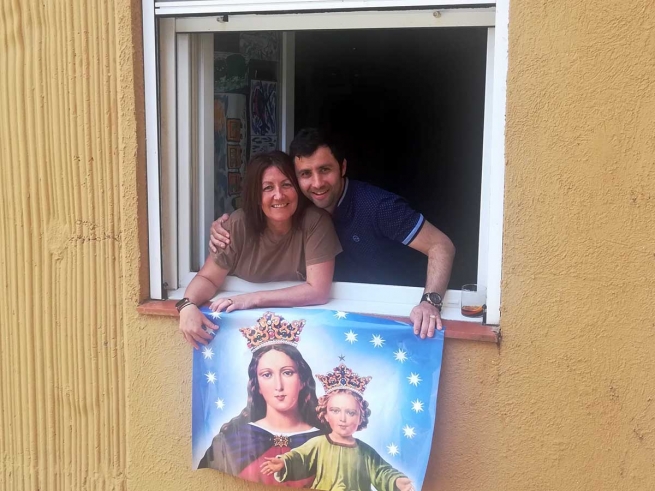 (ANS - Villamuriel) - Many, from all over Spain, participated in the various activities planned between April 30 and May 1 by the Salesian works of Villamuriel de Cerrato, Palencia and Astudillo. It first started on May 1, 1984, when a group left on a pilgrimage with the Image of Mary Help of Christians to travel the distance from Palencia to Villamuriel, where the Image would remain forever. In saying goodbye, the group promised to return the following year to visit the Mother, with fervor and gratitude. The promise has been kept and thus a tradition that has lasted for 37 years was born.

However, on this 1 May 2020, due to the medical emergency caused by Covid-19, the pilgrimage, Mass, the common table, the singing of the Ave Maria and the kiss of the medal were not possible. These 37 years of tradition have thus had to adapt to the times we are all experiencing.

But the Salesian Community, together with the different teams from many entities and associations from Astudillo, Palencia and Villamuriel, responded creatively by organizing various online activities to be carried out in the houses of Palencia, but also of all Castile and Leon, Asturias and Galicia and, in some, young people from across Spain participated. About 14,800 people followed the activities organized to commemorate this tradition. YouTube, Facebook, Instagram, Live were used.

Among the initiatives carried out were the over 1,500 posters of the image of Mary Help of Christians placed in many windows and balconies. "It was our pilgrimage, which took place from window to window, from city to city. The posters were placed in strategic places and the families then collected them. In Villamuriel de Cerrato, moreover, the Municipality itself collaborated," said spokespersons of the Salesian Community.

On April 30, a youth vigil was held in honor of Mary on the theme: "Melodies of life and hope", with an average of 3,400 participants. The vigil was a moment of prayer in memory of all those who are no longer with us and for those who help each day in their various works. It was possible to follow the event on YouTube and, in Villamuriel and other places in Spain, it was broadcast by private speakers and megaphones.

Also on the evening of April 30, 180 families set up decorations in honor of the Help of Christians. This initiative was organized in a special way by the Don Bosco youth center and the Scout Avalón group.

The Eucharist of 1 May in honor of Mary Help of Christians of the Salesian Church of Villamuriel de Cerrato was followed by 3,600 people. There is no doubt that devotion to the Help of Christians is still very much alive in the hearts of her children.