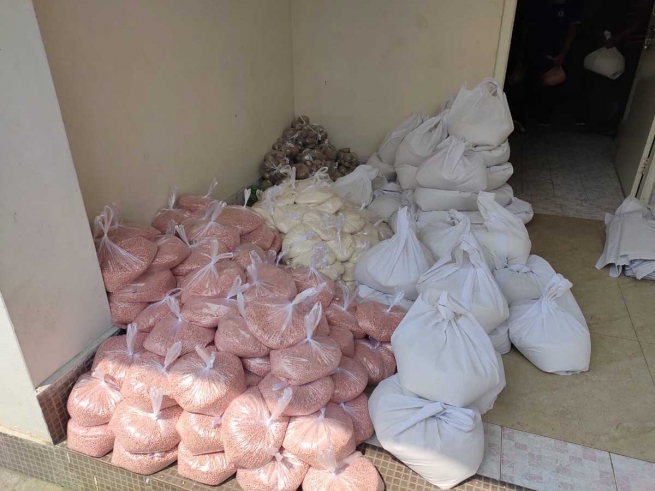 (ANS - Shillong) - The Salesians of the Shillong Province (INS) have taken action to help the most needy and vulnerable people of the cities and villages located in the states of Meghalaya, Mizoram, Tripura, and in some areas of Assam (Silchar ) in the northeastern region of India. Although the region is not among the worst affected by the pandemic, the Provincial Economer, Fr James Thyrniang, and the Office for the Development of the Province, led by Fr Genesius Wanñiang, are working to deal with the health emergency.

In particular, food (especially rice, potatoes, sugar), masks and protective devices were purchased. All the material was then distributed among the poorest and the homeless. Furthermore, some masks were made locally in the Salesian centers. The main objective was to provide food and essential materials, to raise awareness of the importance of personal hygiene and to create awareness among people, but also to educate the population on containment methods and preventive measures.

Another very important aspect was attention to people's spiritual needs, bringing them consolation and peace and strengthening faith in these difficult times. The Don Bosco Media Network, which is a branch of the Province's Social Communication department, provided daily live broadcasts of the Holy Mass and liturgical celebrations and made Holy Week and Easter liturgical celebrations accessible. The latter were broadcast in both English and local languages. The entire broadcast was conducted by Fr Michael Makri, from the Don Bosco Youth Center in Shillong, Fr Manjakattil Joby Joseph Cyriac, from the St Anthony Institute, by Joseph Pulinthanath, from the Peace Center of Agartala, and a few others.

Also, the Province made a donation to the Relief Fund set up by the Prime Minister of the State of Meghalaya.

The population of the region and the civil authorities have greatly appreciated the efforts put in place by the Salesians and have expressed their deep gratitude for the courageous and timely interventions. The need is still great and the Salesians of the Province continue the relief work together with all the people of goodwill.