Italy – Salesians Agnelli: after 50 years, "Dream of Don Bosco" comes back to life 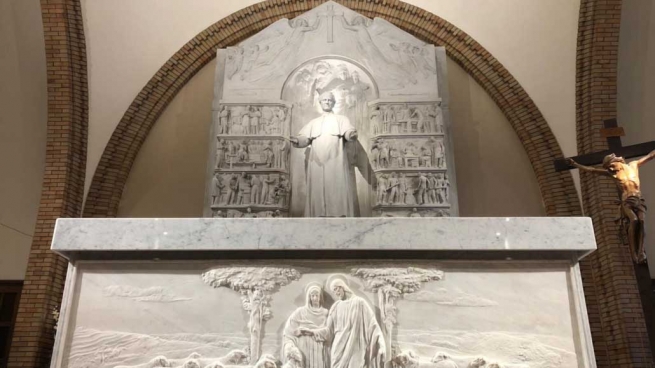 (ANS - Turin) - The restoration work on the ancient altar frontal in the church of San Giovanni Bosco in Mirafiori has been completed. Yesterday, Monday 18 May, on the centenary of John Paul II's birth, the first Mass on the renewed altar was also celebrated.

In the "San Giovanni Bosco" church in Mirafiori behind the altar, against the back wall, there is the imposing marble group with the statue of Don Bosco. Initially, in that position, there was a painting of the saint of the young, but Senator Agnelli had considered it too small in comparison to his grandeur, so he contacted the sculptor Edoardo Rubino (author of the statue of the lighthouse of Maddalena, on the Turin hill) to commission a monumental work from the artist, a work that would reflect Don Bosco's due glory.

The work is a group that contains: in the center, the great figure of Don Bosco, supported by some angels; behind him, in slight relief, the effigy of Mary Help of Christians with baby Jesus, and three angels; on the left and right of the statue, a series of panels depicts different aspects of Don Bosco's evangelizing work, which goes from school teaching to that of crafts, and on to the missionaries who brought the Gospel to the most distant lands; above, the angels who support the cross.

Before Vatican II the wall altar was an integral part of the monument whose frontal represented the dream of the nine years; the symbolic reading of the monument started right from there: from the dream of the nine years, Don Bosco matures his educational mission and through his life experience, gives children a future of hope as good Christians and as upright citizens.

In the 70s, with the construction of the new altar and the adaptation to liturgical norms, that art piece had been placed provisionally outside the church - but was thus exposed to the elements - perhaps as a votive gift, as was the custom then, as a remembrance of World War II in the oratory area rebuilt after the heavy bombing of 1944.

The decision to reunite that element with the main work was taken by the Pastoral Council in 2016 at the beginning of the restoration works of the entire parish church with the aim of presenting and preserving one of the most beautiful monuments dedicated to Don Bosco and, to date, little known precisely because it was incomplete.

The work, which had already been underway for some time, was scheduled to end at Easter, but the coronavirus pandemic slowed things down. In recent weeks, the so-called "Phase 2" has begun, thus the resumption of the construction sector and completion of the work.  Yesterday, the first Mass from the "stop" of the pandemic was celebrated on the renewed altar.

“Today more than ever we need to start again ... Starting from the origins of our charism,” says the parish priest, Fr Gianmarco Pernice. “On Sunday 24 May, the feast day of Mary Help of Christians, despite the limited number of faithful, will be an opportunity to renew that 'yes' to the One who 'did everything'.”