Italy – On 23 May, 100 years ago, monument to Don Bosco inaugurated in Turin 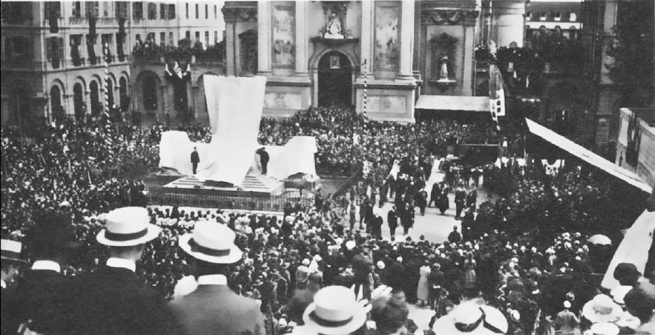 (ANS - Turin) – On 1 September 1911, at the International Congress of Past Pupils, attended by people from 22 countries, the idea of ​​erecting a Monument to Don Bosco as a solemn expression of gratitude to the great educator from those who had benefited by his charisma, came about. The idea was to inaugurate it in 1915, in memory of the centenary of his birth, but the First World War delayed the inauguration, which took place on May 23, 1920, on the eve of the feast day of Mary Help of Christians and the solemnity of Pentecost. From tomorrow, it will be 100 years that it welcomes faithful and members of the Salesian Family when they come on pilgrimage to the Salesian Mother House.

The monument consists of a truncated pyramid and two lateral wings that form a sort of altar. At the top and in the center of the pyramid there is the main group consisting of the figure of the saint, surrounded by 4 children; at the base of the staircase is the group of “Humanity bowed to the kiss of the Cross” in the guise of a veiled woman who offers a man the crucifix to kiss.

The lateral wings are used to represent Don Bosco's greatest devotions: on the right, there is the “devotion to the Holy Eucharist” represented by a robust worker in adoration, before whom a woman prays and a mother expresses the tenderness of Christian motherhood; on the left the “devotion to the Virgin Help of Christians” where a proud Indios prostrates himself to Mary Help of Christians, to whom two devoted virgins bear flowers.

All around the pyramid runs a festoon with an ornamental motif of exotic fruit, which recalls the theme of the three high reliefs located on the back and which show some of the main areas of action of the spiritual sons of Don Bosco at the time of the monument: “The Salesian missionaries among Italian emigrants” at the center; on the right “the Salesian trade schools”, and on the left “the Salesian agricultural schools”.

A fundraiser was launched to build the monument, which was very successful. The estimated sum was £ 200,000 (Italian Lira), soon reached with donations, and with the City of Turin which alone contributed £ 20,000.

The international competition for the choice of the project was then started. Among 59 candidates, after several rounds, Gaetano Cellini of Ravenna won; better than the other competitors he had been able to capture the spirit of charity that had permeated the Saint's activity.

The inauguration was majestic: a large audience, lively and sincere enthusiasm from all present. For the occasion, the event's organizing committee also had a scenographic lighting system installed which involved the monument, the church of Mary Help of Christians and the adjacent oratory.

On the monument to Don Bosco located in Piazza Maria Ausiliatrice, Fr Bruno Ferrero, Director of the Italian Salesian Bulletin, made an evocative presentation that illustrates the inherent messages and the Salesian values ​​that it manages to convey.