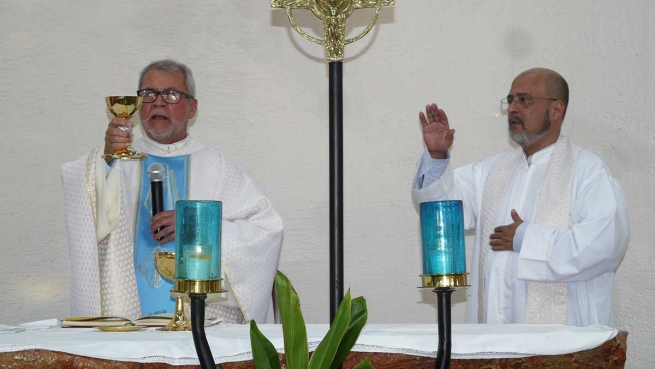 (ANS - Guadalajara) - Yesterday, Monday 25 May, Fr Filiberto González began his service as Provincial of the Mexico-Guadalajara Province (MEG) during a Eucharistic celebration in which only a few people could physically participate, given the current scenario due to the Covid-19 pandemic.

In the homily of the Mass, Fr González mentioned that he began his service in an unprecedented historical context. Then pleading for Mary's intercession to end this emergency, the new MEG provincial said, "that it's not about ending this pandemic to continue as before," and suggested various changes and actions to take after this period.

The celebration was initially chaired by Fr Hugo Orozco, Fr González's predecessor as MEG Provincial; having been elected by the 28th General Chapter of the Salesian Congregation as Councilor for the Interamerica Region, he was also the one who read the letter in which the Rector Major announced the name of the new Provincial of Mexico-Guadalajara, and represented the same Successor of Don Bosco at the inauguration ceremony of Fr González.

Fr González's service of animation and government began formally once the Profession of Faith was pronounced, manifesting his adhesion to the faith of the Church and his willingness to serve his brothers and young people. As a manifest gesture of the handover, Fr Orozco handed the chasuble to Fr González, who from that moment presided over the celebration.

In the homily of the Mass, because of the Feast Day of Mary Help of Christians and with reference to the passage of the Gospel proclaimed during the celebration, Fr González reminded his Salesian confreres that they are all called, like Peter, to answer Jesus' question "do you love me?", and to do so in front of young people. "It's a specific question that," insisted Fr González, "does not allow for silence and awaits an answer."

At the end of the homily, the new Provincial recalled the end of the formula of the religious profession of the Salesians, making it his own prayer: "Your grace, Father, the intercession of Mary Help of Christians, of Saint Joseph, of Saint Francis of Sales and of Saint Giovanni Bosco, and of my Salesian brothers, assist me every day and help me to be faithful."

The celebration was broadcast live on Facebook so that all the communities of the Province, members of the Salesian Family, the family and friends of Fr González could participate remotely.

Fr González received this office having recently completed 12 years of service as a member of the General Council of the Salesian Congregation, as General Councilor for Social Communication, elected at the 26th General Chapter (2008) and re-elected to the GC27 (2014). Before this service, he had already held the position of MEG Provincial in the period from 2006 to 2008.

The video of the celebration is available here