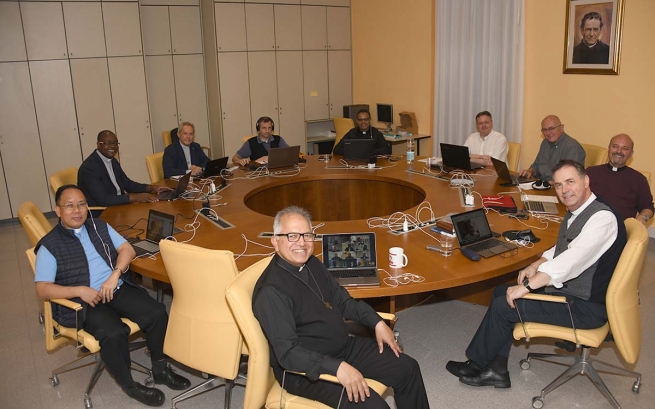 (ANS - Rome) - On June 3, 2020, Fr Ángel Fernández Artime, Rector Major, Fr Stefano Martoglio, his Vicar, and a group of General and Regional Councilors present in the Generalate, with others scattered in different countries of the world, but connected online, resumed their work of organization and programming.

Plenary meetings of the Rector Major and the General Council began on June 3, but the organization of the Congregation had already started in May, with the appointment of seven Salesian Provincials.

In June, as they do every year, the meetings of the Rector Major and the General Council began, but this year due to the Covid-19 pandemic, they began with the physical absence of four Regional Councilors and one General Councilor, who were unable to enter Italy.

The General Council is made up of 15 members, including the Rector Major and the Secretary General. To date, 10 Councilors are present, even if those who are absent continue to participate by teleconference in the organization and programming of the Salesian Congregation.

The work of the Rector Major and his Council has as its mission the ordinary administration and the preparation, under the indication of the Rector Major, of the letter that will act as the program for the six-year period and other topics for reflection. The Council will adopt the document and make its own the resolution of the 28th General Chapter with the guidelines of the Rector Major, the navigation chart of the Congregation based on the guidelines of Pope Francis and the reflections of the Chapter. Thanks to the organization of these documents, the Congregation's Project and Programming for the 2020-2026 term will be offered in the coming months.

Due to the pandemic, the travelling of Councilors to various parts of the world shall be reduced and the intermediate October session of the General Council will reflect and evaluate new working methodologies.

The fundamental mission of the General Council is to cooperate with the Rector Major in the animation and government of the Congregation "to identify and study the problems which concern the common welfare of the Society, to promote fraternal union among the different Provinces and to develop an ever more efficient organization for the fulfillment of the Salesian mission in the world", states the Salesian Constitutions (art. 130).