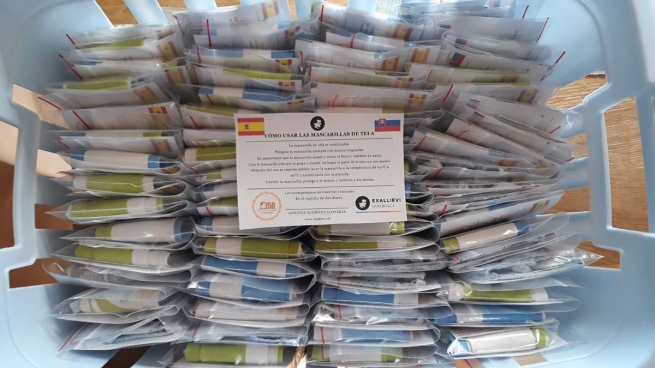 (ANS – Bratislava) – The challenges of these days did not leave many past pupils and Salesian family members in Slovakia cold, helping their neighbours as conditions permit. One of the opportunities to help was the project “Let’s Donate a Face Mask”. Its goal was to collect 10 x 150 face masks – as a sign of the anniversary that the past pupils in the world commemorate this year.

However, the will to get involved in the aid was even greater and within a few days, 2,871 face masks were collected. Volunteers from several places in Slovakia packed each face mask into a separate package containing instructions for its safe use and a picture with the relics of Fr Titus Zeman and Anka Kolesárová. In several cities, various components of the Salesian family, such as Salesian collaborators or members of ADMA, were involved in the project. "It was amazing to see how quickly women of all ages, professions and statuses were mobilized. An 88-year-old lady sewed a face mask, but also a 4-year-old girl using her toy machine. It is admirable what numbers of face masks young mothers who sat at the machine in the evenings were able to make, despite having small children and teaching their school kids at home. A busy front-line nurse was involved in the event, and even an oncology patient. Everybody was looking for ways to help,” said Katarína Pirohová, a volunteer from Prešov, describing her experience.

“My husband started to sew, and the older daughter learned to sew as well, so there was a battle for the sewing machine at home,” says Lenka Klingová, a volunteer who joined the project with the whole family. “My friend Danka helped to make the cords and ironed hundreds of meters of bias tape. Younger children also helped with packaging; it became a series production, so it was a pleasant family activity in the end. We have received a lot from God, we have something to return.”

Past pupils delivered face masks with silver fibre to Salesians as a priority. They also supported projects of peripheral interest - the Roma community in Plavecký Štvrtok and the marginalized community project in Nitra - Orechov Dvor, where Salesians sisters operate. In distributing aid, they also thought of friends in the countries most affected by the coronavirus in Europe. Almost 700 face masks were sent to Salesians in the city of Leon, Spain. More than 600 face masks went to the Salesian communities in Costanta, Romania. One consignment of face masks was also sent to Italy. Some of the face masks with the logo of Don Bosco were also sent to the main Salesian house in Rome to Fr Eusebio Muñoz who was requested to distribute them among the fellow brothers.

The social project of Slovak Past Pupils called “Let's Give a smile”, which is always held in the Advent, thus received an exceptionally new set of contours. Thanks to more than 40 involved donors, including the past pupils and the Salesian family from different parts of Slovakia, the Sisters of Charity and the School Sisters of Notre Dame, the initiators responded to the need for extreme caution and security during the coronavirus pandemic at its inception.

“I knew that many of the past pupils were actively involved in their communities, for example helping older people with shopping, but I was thinking about doing something together. Our current anniversary automatically directed us towards the amount we wanted to collect - 10 x 150. The fact that in the end, the number of face masks was double – almost 3,000 – only shows that our members are open to help their neighbours and are able to react quickly,” says the President of the Past Pupils Association and the initiator of the charitable project Róbert Mruk.