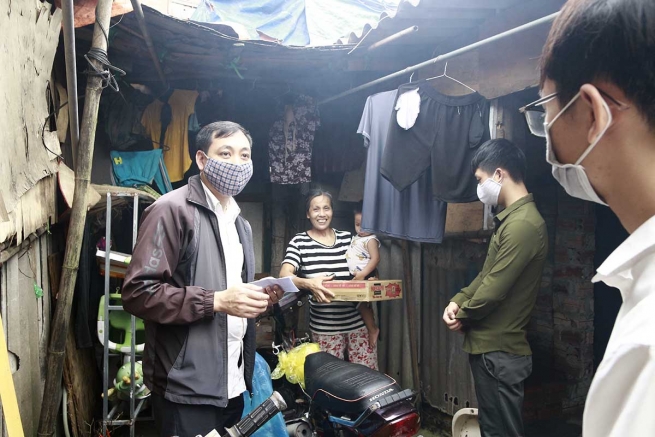 (ANS - Ho Chi Minh City) - Although bordering China, the country from which the Covid-19 pandemic originated, Vietnam is among the most virtuous countries in virus resistance: only 332 infections and 0 victims - so much so that several restrictions have already been eased in recent weeks. To this excellent result achieved by society in general, there must be added another beautiful and specifically Salesian goal: that of having set up and coordinated an excellent machine of solidarity, for the benefit of many poor and needy.

If, in fact, at a healthcare level the problems have been contained, the fear of the virus has caused difficulties as regards work, and therefore in sustenance, for many people and families, as it has in every other part of the world. For this reason, the "Saint John Bosco" Province of Vietnam (VIE) has decided to launch the "Ban Covid-19" campaign.

After a meeting of the Provincial Council, a special committee for the management of the initiative was appointed. The Provincial sent a letter to all the Salesian works and presences, asking each of them to help at least 50 families in their neighborhood. The special committee then elaborated the strategic plan, a campaign for the collection of local funds was started and, without resorting to aid from abroad, they set themselves the objective of collecting the equivalent of 60,000 euros in donations to help at least 1,500 needy people.

The solidarity campaign lasted a month. Besides bringing relief to people in difficult situations, it also favored the creation of links between the Salesian communities, the various groups of the Salesian Family and other social promotion organizations. Overall, 138 spiritual sons of Don Bosco, 92 collaborators, 35 benefactors and 41 friends of Salesian works contributed to the campaign.

At the end of the campaign, monitoring of the results showed the results to be higher than expected: the money raised was approximately 74,000 euros, and the people benefited were more than 7,300 - without considering that four communities worked in the solidarity initiatives, without actually counting the people helped.

In conclusion, it can be said that the launch of the "Ban Covid-19" campaign by the Vietnam Province has not only helped many poor families, but has also fostered the sense of belonging within the Province and creating links with the local Salesian Family, benefactors and society and civilians, as well as representing an excellent vehicle for evangelization, as it gave witness to the Vietnamese society of the Salesian mission in the service of the poor.