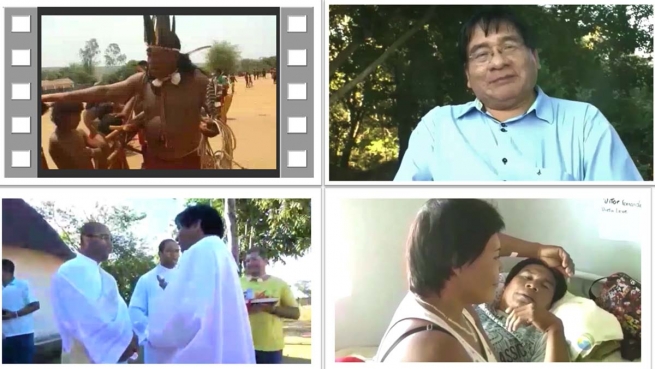 (ANS - Nova Xavantina) - As in the entire Amazon region, the Indigenous people of Brazil are among - or segments of - the population most at risk for coronavirus. The Indigenous people of this area live far from hospitals and often have very few basic infrastructures, no specialist assistance, few medicines. The only thing left for the Salesian missionaries to do is "prevent" contagion and the risk of death. To achieve this, they have produced a video in the Salesian spirit.

The 15-minute video was produced and directed by the Salesian Fr Aquilino Tseré'ub'õTsirui'á, of Xavante ethnicity, and Fr Bartolomeo Giaccaria. The audiovisual tells the story of the origin of the virus, speaks of the general guidelines of transmission and prevention, and quotes the messages of Pope Francis, the Rector Major of the Salesians, and the Superior of the Province of Brazil-Campo Grande (BCG), Fr Ricardo Carlos. The editing was handled by the indigenous director of the Sangradouro mission, Divino Tserewahú, with the intention that the material be shared by the locals through apps and social networks.

That Covid-19 is aggressive and dangerous to the health of the Xavante is beyond doubt: in Brazil, in three months of the pandemic, official data published by the Special Secretariat for Indigenous Health reported, as of 14 June, 281 victims and 5,361 infected people.

From the news of the arrival of Covid-19 in Brazil, the Salesian missionaries immediately realized that the materials that spoke of prevention measures and behavior guidelines were all in Portuguese, and the Xavante did not understand them. A part of the indigenous population even refused to take preventive measures. Thus was born the idea of ​​producing the video in the Xavante language, whose focus would not have been simply prevention, but the demonstration of the existence of the disease, its origins and the fact that it is a pandemic.

One of the Xavante's mistakes was thinking that this disease would only affect non-indigenous people of the cities. "The video explains that coronavirus attacks everyone and that it is not enough to have Christian faith or culture to be immunized," clarifies Fr Eloir de Oliveira Gonçalves, SDB.

Due to the community's resources and technological access, the distribution of the video initially took place via DVD. Hundreds of disks were distributed, along with messages on WhatsApp.

Some Xavante have already realized the serious risks of this pandemic and are convinced of the need to follow the general rules of prevention: to reduce contacts with the non-indigenous people of cities as much as possible; avoid gatherings; use masks and other personal hygiene measures.

Although many continue to insist on wanting to protect themselves only by performing healing rituals and invoking the good spirits, the broadcast of this video will help to stop indigenous people from being infected and dying.