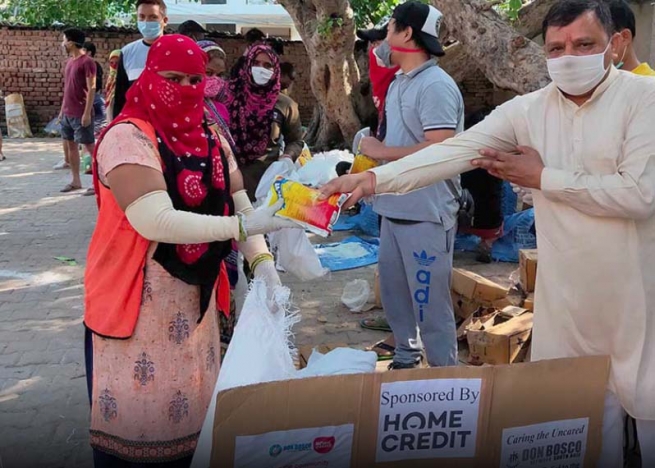 (ANS - New Delhi) - The news from India is shocking: since the first coronavirus infection was confirmed on January 30, the cases have not stopped increasing. To date, India has recorded 440,000 cases of contagion, and 14,011 victims, and as these figures continue to grow, containment measures are beginning to be lifted.

The harsh quarantine imposed initially on 1.3 billion people, and subsequently extended, particularly affected the poor and migrants. A gradual return to relative normality began on 9 June, but the country is still the fourth in the world in terms of the number of infected people.

Coronavirus is becoming for many people, living on what they earn day by day, a matter of survival. The only concerns are being able to go home to enjoy at least a sense of emotional security and have something to eat at the end of the day.

Together with the "Don Bosco Network" active in India and the other Salesian NGOs operating in all the states of the country, the Salesians offer food to over 1.2 million people with prepared meals and the delivery of 170,822 essential food kits.

The members and volunteers of the Salesian organizations have created and distributed over half a million masks to the most needy population. From the beginning, the Salesians in India, as in the rest of the world, have concentrated their beneficial work on people in conditions of extreme poverty and greater vulnerability.

The "Don Bosco Network" has been at the side of the poor and displaced people since the very beginning.

For its part, the Salesian Mission Office in Madrid, "Misiones Salesianas", has contributed by delivering a weekly kit of food and hygiene products to hundreds of families from tribal communities in the state of Tamil Nadu. Thousands of people benefited from this action aimed at alleviating the effects of Covid-19 lockdown and preventing contagion.

Taxi drivers, street vendors, migrants, refugees and people living on the streets were identified. The action was also aimed at people who were alone, vulnerable elderly people and children. Everyone is helped according to their specific needs.

In addition to food, the Salesians have provided accommodation, transportation and medical assistance. The Salesian NGOs, for their part, worked with many local administrations to coordinate the relief work and obtain the maximum benefit.