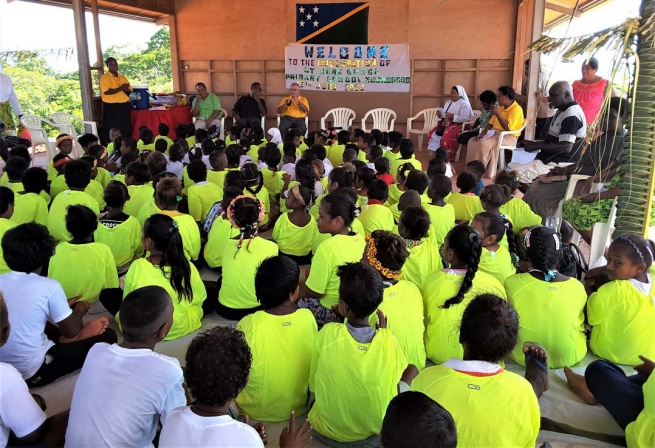 (ANS - Gizo) - “If you want to harvest soon, plant vegetables… if you want to harvest, after a long time, fruits for generations, educate persons now.” Thus says popular wisdom. And evidently in Gizo, the capital of the Province of New Georgia, in the Solomon Islands, they have decided to invest in the future: on Saturday 13 June, in fact, in the presence of the local bishop, the Salesian Msgr. Luciano Capelli, the new primary school "St John Bosco" was inaugurated.

The officials of the Catholic Church Gizo Registered Trustees (Inc.) solemnly inaugurated the new, recently registered school. The ceremony was attended by 205 students, from first to fifth grade, who will benefit from the new school, alongside their parents and community representatives.

These children belong to various communities located in the area most affected by the 2007 tsunami, on the west side of the city of Gizo: in Nusabaruku, the fishing village and other small villages in the coves behind the fishing village, who find it difficult to reach Gizo every day by boat.

The new school is located on the top of the hill known locally as "Millionaire Point", now renamed with the Christian name of "Nusa-Bosco" - where "Nusa" in local language means "Island", and "Bosco" is given in tribute to the Saint of Youth.

If today hundreds of children can access quality education, it is primarily thanks to the help offered by the Salesian Mission Office "Don Bosco Mission Bonn" in Germany, and to the "Opera Don Bosco" Foundation in Milan, who operated in synergy with friends and benefactors of the Catholic diocese of Gizo and other foreign countries.

Gratitude was also expressed towards the local authorities, who leased the land used for educational purposes to the diocese.

On a practical level, the construction of the school was carried out by several past pupils of the local Catholic schools, the so-called Diocesan Boys, trained by the many Italian volunteers who worked hard over the past 13 years in the post-earthquake and tsunami reconstruction program of the diocese of Gizo.

The six classrooms and the multipurpose room are now ready for children to attend, as are the three houses for school staff. The project also included a cemented path to facilitate access to the institution, avoiding children from injuring themselves or sinking their feet into the quagmires that often arise.

“We are grateful to God for this gift to these 205 children who feel one in their task of growing into good Christians of their own respective churches and honest citizens of Solomon Islands. We might not see the fruits of what we are planting, the children of these children will receive the fruits of their education now their fathers and mothers now use.”