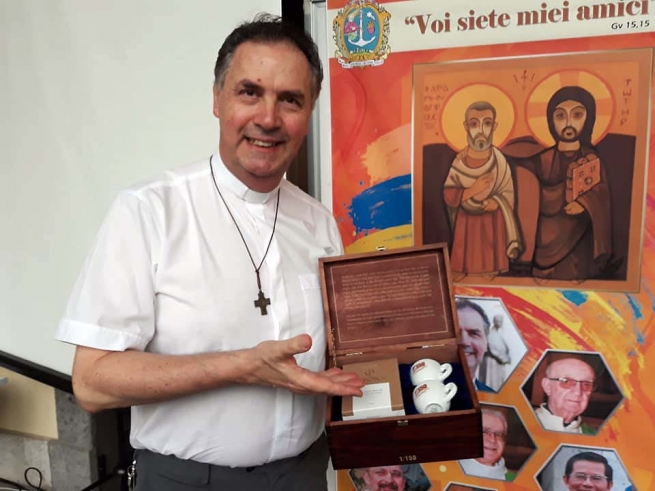 (ANS - Rome) – Just as Carlo Gastini, expressing the sentiment of all the Past Pupils of the Don Bosco Oratory, donated coffee cups to the Saint of Youth on June 24, 1870, so too yesterday, June 24, 2020, on the 150th anniversary of that tribute, representatives of the Past Pupils of Don Bosco gave Fr Ángel Fernández Artime a set of coffee cups, accompanied by words of sincere gratitude.

The symbolic rite took place at the end of the Eucharist presided over by the Rector Major in the Basilica of the Sacred Heart. In the choir of the church, Vito Gentili, Salesian Past Pupil and collaborator in many initiatives carried out at the "Sacred Heart" of Rome - which houses the Salesian Generalate - said on behalf of all the Past Pupils of the world: “The figure of Don Bosco is fascinating and we see you [Fr Artime] as his Successor. We feel your closeness and encouragement towards us. Thank you for the many initiatives to strengthen the Salesian Family, for your dynamism, action, prayer and testimony.”

“Enjoy this feast day! We assure you of our collaboration, our prayers, and all our affection!” he concluded.

Subsequently, Biagio Narciso, a lawyer from Caserta, who recently joined the World Council of the Confederation of the Past Pupils as a representative of the Young Past Pupils (GEX) of Europe, gave the tribute to Don Bosco's Successor.

A tribute which, in the best Salesian tradition, is not an end in itself, but has a solidarity value. In fact, the cups were accompanied by coffee from the "DI BOSCo – the Coffee of Past Pupils" project. “A project,” they reminded everyone, “that is not only based on the quality of the coffee produced, but also on the quality of the people who produce it and with whom we collaborate. The 'Gastini blend' comes from the collaboration of Past Pupil entrepreneurs from Europe and Asia, thus creating a global project.” In fact, the sale of coffee and cups produced for the anniversary, in a limited edition of 150 copies, will serve to support the educational and social projects of the Past Pupils in America, Africa and Asia.

For his part, the Rector Major also replied with phrases coming directly from his heart as Father and Center of Unity of the Salesian Family: “Thanks to all the Past Pupils of the world! Looking at you, you make us think of all the good that is being done in the Salesian presence in the world. Because we know that for many boys and girls, to come to a Salesian house at the hands of Mary means to change one's life.”

And finally, he concluded: “When I think of the Past Pupils I immediately think of the millions of boys and girls that we have in all our presences, and I say to myself: we must give them the best of ourselves, because one day they will be Past Pupils and Past Pupils like those we have today. Let's move on, go forward, always in communion with Don Bosco!”

The closeness, affection and mutual gratitude between the Salesians and those who received an education according to the Preventive System are alive and tangible, today as they were 150 years ago.