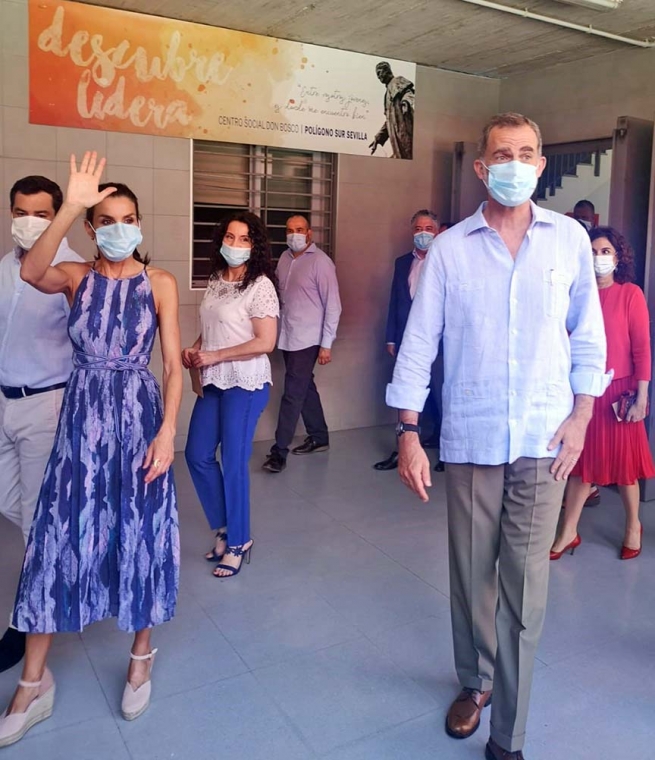 (ANS - Seville) - On Monday 29 June the third stage of the tour of the King and Queen of Spain in the autonomous community of Andalusia took place, a tour that started after the easing up of the Covid-19 restrictions. Philip VI of Bourbon and Doña Letizia started their stay in Seville, after the previous stops in the Canary and Balearic Islands. They visited the Social Center of the "Fundación Don Bosco", where the Salesian community "Jesús Obrero" is located, in the "Polígono Sur” of the Andalusian capital.

"We wanted their Majesties to become aware of a model itinerary that many young people in the neighborhood follow as a path of social and work integration," explained Antonio José Mengual, Director of the "Fundación Don Bosco" for Seville and Extremadura. Those responsible for this program showed three stages: first, the Pre-work School, in the context of Second Chance Schools, attended by young people who have left formal education and who have not yet had the training or age to enter the job market.

The second of the stages was with a group of young people who participated in training in the hotel and restaurant sector. This path is the prelude to an internship and the gateway to a possible job. In 2019 there were over 600 job placements obtained by the students of the Don Bosco Social Center, thanks to over 150 companies that collaborate by accepting interns and trainees.

The visit ended with the "crown jewel" of the work: "Occhiena", an ethical fashion center. It is a social enterprise of the "Fundación Don Bosco" which works for the insertion of people in vulnerable situations, especially women, in the production processes, with the creation of jobs, and the awareness-raising of professionals and companies to operate in the parameters of ethical fashion.

The managers of the foundation explained to the Royals that the alarming situation caused by Covid-19 did not paralyze the services of the Don Bosco Foundation. It continued to work, with tenacity and commitment, to provide answers to the most vulnerable groups. Having a job contract is the dream of thousands of people, and the good news is that even during the months of lockdown, the "Fundación Don Bosco" in Seville favored 81 job placements.

The "Fundación Don Bosco", an organization of the "Spain-Mary Help of Christians" Salesian Province, works to help young people and defend their rights. To this end, it promotes a more just and equitable society that guarantees the rights and well-being of the most vulnerable people. It cooperates with the Polígono Sur Commissariat, the Red Cross, Caritas, the Community Social Services and other social bodies in the "Polígono Sur" district to combat the situation of poverty and exclusion afflicting many families and which has worsened with the arrival of Covid-19.