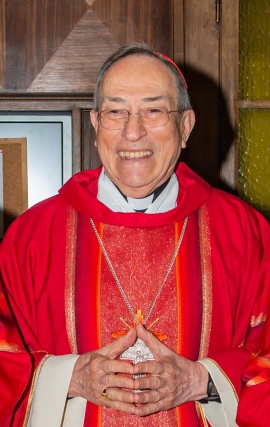 (ANS - Tegucigalpa) - Cardinal Óscar Andrés Rodríguez Maradiaga, SDB, celebrated his 50 years of priesthood last Sunday, June 28, with a Mass behind closed doors in the minor Basilica of Suyapa. During the Eucharist, the Cardinal expressed what the priestly ministry consists of and asked the faithful to walk the path of generosity, to work in the service of others, to be in solidarity, to fight for justice and to be faithful to the will of God.

In the homily, taking inspiration from the Sunday Gospel, the Salesian cardinal said: "Today we are aware of the difficulty of speaking of the cross in a society that has made personal success its most precious idol and taking the cross will lead us to identify with Jesus, to have a single claim, that of loving as He loved."

At the same time, he blamed the living simply to possess and accumulate, because Jesus calls to donation, to solidarity, to the donation of one's life, to live a true love: and this is precisely the meaning of the priestly ministry within the Catholic Church, he observed.

"The kingdom that Jesus announces symbolizes the deepest desires of our heart, universal values, peace, justice, love, forgiveness, mercy and hope; this is the priesthood of Christ," he said.

Then he added that the appointment as bishop, according to the Gospel, does not mean becoming an important person, according to the criteria of the world; rather, it requires renouncing the ambition of power, of possessing, of recognition, and opting instead for Jesus and for the values ​​He embodies.

The Salesian cardinal also recalled that day 50 years earlier, when in the Basilica of the Sacred Heart of Jesus in Guatemala he was ordained, together with five companions, three Salesians and two from the Congregation of the Mission. Two of his companions of the time are now already in the Father's House, Fr Settimo Rossoni, SDB, who served in the "San Miguel" Institute and died a year ago, and Fr Vicente Ramos, a Spanish Salesian who died a few years ago in his homeland.

Continuing, he expressed thanks for the great good that, in these 50 years, he has received from many families, from so many brothers and sisters, who have welcomed Christ in the person of his humble minister.

"I want to thank all the living and the dead who have helped me so much in my life, starting with my parents Andrés and Rachel, and many spiritual mothers and fathers, many Daughters of Mary Help of Christians and religious of other communities who received the Lord Jesus from this humble priest," he said.

Lastly, he also thanked Pope Francis for his affection and his pastoral closeness and all those who accompanied him on this long journey and, like the Pontiff, asked for prayers for himself to be able to continue on this path until the Lord decides to call him to eternal Easter.