Sierra Leone – Salesian work in prisons: a new beginning amid Coronavirus and after a revolt 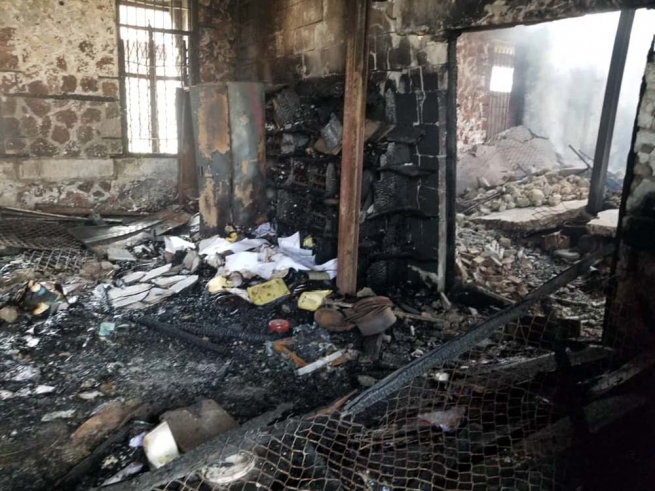 (ANS - Freetown) - Pademba Prison in Freetown was built in 1937 to house 300 prisoners. Since then, nothing has changed in its facilities, except for the fact that it now hosts 2,000 prisoners crammed into unhygienic cells. The Salesians are the only institution that works with detainees, even today, when fear for Covid-19 led to a riot that ended in unrest, fires, and deaths among the detainees.

On 29 April, 237 prisoners were scheduled for release for minor offenses. A few days before that, however, the first case of coronavirus inside the prison had been confirmed and visits thus prohibited. Prisoners were also forbidden to leave the cells as a preventive measure, but they interpreted it as another humiliation.

Pademba prison, without security cameras and with a fivefold number of prisoners compared to its capacity, experienced a bloody revolt that day. In the morning several inmates reached the internal clinic and set fire to it. They then circumvented the guards, opened all sections and burned the kitchen, pharmacy, document registry, and all the workshops.

"In the chapel, there was some damage and in the Don Bosco room, where 225 of them receive an extra meal every week and there is a computer room and a library, everything was destroyed," said Salesian missionary Fr Jorge Crisafulli. Huge material damage, fires, many injuries and deaths were the toll of the revolt.

Some of the beneficiaries of the Salesian initiatives helped the guards to climb the walls to save their lives. The police and army opened fire indiscriminately. The revolt was suppressed within four hours and the prisoners locked up in their cells. For three days they received no food or water and were tortured to locate the fomenters. Some, without medical treatment, died in the following days.

The Salesian team working in the prison managed to enter to assess the damage and the situation of the prisoners the next day. The Salesians' commitment to the authorities was to start feeding all the prisoners - currently 1,421 - to carry out medical visits and take care of them.

Meanwhile, Coronavirus has progressed in prison, reaching 19 positive cases. Fifteen of them have already recovered and four are still confined. "We brought beds and rehabilitated an area to isolate it as a hospital," assures Fr Crisafulli.

The Salesians give each prisoner a bag containing a paste called gari, powdered milk, vegetables, fruit, sugar and water. "Gradually they let them out of the cells and they also bought buckets of water for their cleaning," said the Salesian.

Fr Crisafulli, together with the whole team of Don Bosco Fambul, concludes by stating that "the prisoners trust Don Bosco."