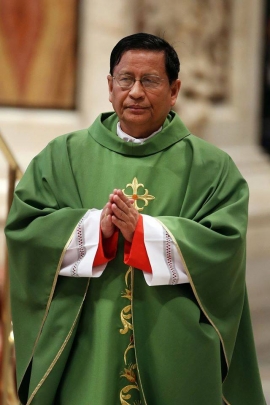 (ANS - Yangon) - "If humanity is divided, the pandemic crisis cannot be overcome. If no one is left out, it is possible to heal a planet. For the good of all, let's take care of the refugees. If people continue to be forced to abandon their homes, we will remain a world in crisis." With this heartfelt but lucid analysis, Cardinal Charles Maung Bo, Salesian, archbishop of Yangon and President of the Federation of Bishops' Conferences of Asia (FABC), made an appeal to the international community so that the crisis generated by Covid-19 be not heaved with all its painful weight on the shoulders of the weakest, who are migrants, refugees and displaced persons; rather, it must become an opportunity to build a more supportive world.

Migrants, refugees and internally displaced people in Myanmar and throughout Asia face increasingly difficult situations: "They are often on the run, live in overcrowded places and with inadequate health care," wrote the prelate in a letter released at the end of June.

Conflicts remain the main cause of forced migration in Asia, then focusing on his own country, Myanmar, where "war, inter-ethnic tensions, political choices cause the displacement of thousands of people who are now starving to death in the north of the state of Rakhine and in other states like Chin," the Cardinal launched an appeal, hoping that "any conflict that causes suffering for people will be resolved through dialogue and a constructive search for peace."

Referring to the Burmese context and to the entire continent, he added: "Priority must be given to the recognized principles of international law, proper to civilized countries as regards the protection of displaced persons," recalling that "migrants and internally displaced persons in Asia must not face discrimination caused by the crisis linked to the Covid-19 pandemic (...). There is an urgent need to include the needs of refugees, asylum seekers and internally displaced persons in all response policies to Covid-19, from relief to economic aid for survival."

"To end the health crisis, alleviate hunger and poverty induced by the pandemic and to prevent the eradication of people as refugees and displaced persons," he noted, "we must face the real causes of conflicts, stop military offensives and allow displaced people to return to their villages," said the Cardinal.

Finally, the Salesian cardinal issued a heartfelt warning to Asian political and religious authorities, so that they "pay particular attention to the difficult situation of undocumented migrants, refugees and asylum seekers, and to help them with all the support they need."