Argentina – Monsignor Ronchino "inspired us to be better": he was bishop of Comodoro Rivadavia for over 10 years 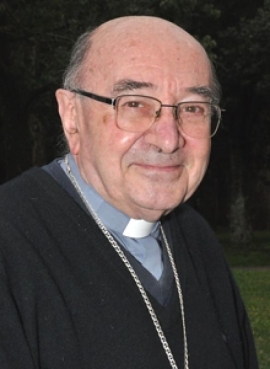 (ANS - Cordoba) - The Salesian priest Pedro Luis Ronchino was bishop of Comodoro Rivadavia for more than 10 years. He died on 30 June 2020 in Casa Zatti, Cordoba. Monsignor Pedro Ronchino was born in Rosario (Santa Fe) on June 18, 1928. At the age of 92, after 75 years of Salesian religious profession and 65 years of priesthood, he died peacefully in the hands of God on June 30, 2020.

Son of Italian immigrants (Antonio Ronchino and Rosa Scapini), he approached the Salesian work for the first time at the Collegio San Giuseppe di Rosario, on April 1, 1937.

On 31 January 1945, the young Pedro Ronchino made his first profession in the Salesian Congregation. Between 1944 and 1948 he experienced the post-novitiate stage, first in Fortín Mercedes and then in Colonia Vignaud. He remained in this same house during his internship until 1951.

He made his perpetual profession in the Salesian House of "La Trinidad" in Ferré (Buenos Aires) on January 30, 1951.

Between 1951 and 1954 he attended the theological studentate Clemente Villada in Cordoba. He was ordained a priest on August 1, 1954, also in Cordoba, by Monsignor Castellano. In the same year, he began his specialization in Philosophy at the Pontifical Salesian University "Rebaudengo" in Turin until December 1957. There he received the title of doctor of philosophy.

From 5 July 1975 to 12 September 1992, his new mission field was the city of Comodoro Rivadavia, as Vicar General of the Diocese, accompanying Monsignor Argimiro Daniel Moure, also a Salesian and third bishop of that city. After the death of Monsignor Moure, Fr Pedro Ronchino was appointed diocesan administrator (1992-1993) until he was appointed Bishop of Comodoro Rivadavia on January 30, 1993, by John Paul II.

Monsignor Ronchino took possession of the see on 19 March 1993 and resigned due to his age on February 19, 2005. His episcopal motto was: "O Maria, Madre mia": a faithful reflection of his life, totally donated to Our Lady.

Since May 2005 he lived in his beloved San Giuseppe, Rosario, faithfully and courageously serving, with the heart of a shepherd, all those who came to the parish of Mary Help of Christians.

Over the years, the health of Monsignor Pedro Ronchino deteriorated with significant neurological damage. This led to the decision to transfer him to the provincial infirmary of Casa Zatti in Cordoba, where he arrived in 2016.