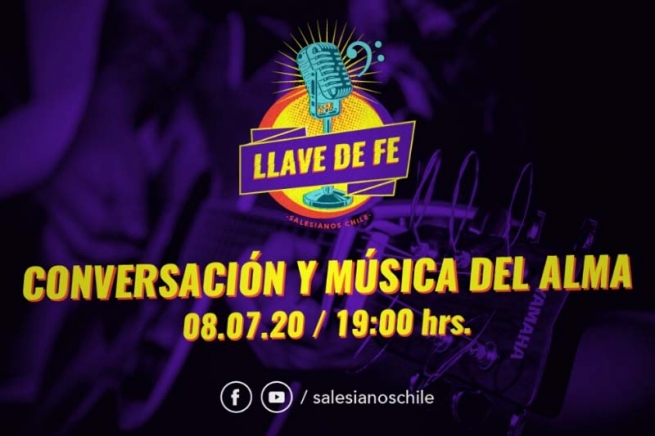 (ANS - Santiago) - The first chapter of the series of mini-concerts and conversations program with Catholic musicians, "Llave de Fe" (Key of Faith), was broadcast yesterday, July 8, at 7pm on the Facebook page and the YouTube channel of the Salesians of Chile. This is a new proposal for millions of Catholics and, in a special way, for young people who want to listen to the voice of the singers and learn about their experiences of faith.

Fernando Leiva, Pablo Cifuentes, Fer Toledo, the "Servicentro" group and Sister Susana Díaz (FMA), are just some of the Catholic musicians who will participate in this program. "Llave de Fe" will offer a mini-concert, performed by Catholic artists from their homes, and will be interspersed with a conversation with the musicians.

The aim of the program is to promote the music and career of the main Chilean and international Catholic artists and groups, and to generate a space for reflection and meeting with the Lord.

The program will be held online every Wednesday starting at 7pm local time (UTC-4).

Alejandro Manríquez, journalist, program animator and member of "Cancão Nova", a group of the Salesian Family, expressed: "We know that music is a key that opens the door of the heart to get closer to God. And, above all, at this stage of confinement that we are experiencing, we hope to contribute with a message of hope and faith through songs and testimonies of life."

The first episode was a success and was seen by thousands of people. To intervene, sing and speak with the public was Fer Toledo. Born in Havana, Cuba, from an early age he became interested in visual arts and music as a universal means of expression, then combining all this with his faith, after a gradual conversion derived from experiences lived in adolescence. He trained in the Salesian community dedicated to Mary Help of Christians, attracted by the youthful style and the depth of the Christian message brought into daily life and is a Salesian Cooperator.

Answering questions, he said he currently lives in the city of Concepción, Chile, with his wife and two children and belongs to the Latin American network of Catholic artists "ARCA". He directs the multimedia production company: "El Gris producciones" and continues to work on projects that blend evangelization, music and the visual arts.

The "Llave de Fe" project is a proposal that sees the Salesian Province of Chile as the promoter of the initiative, with Felipe Valdes as a member of the General Management and Vicente Fritz, Director of the Chilean Salesian Bulletin, as Content Director. It certainly represents a very valid initiative in times when the digital world is the only means in which people meet, relate to each other and tell stories that can become life models.