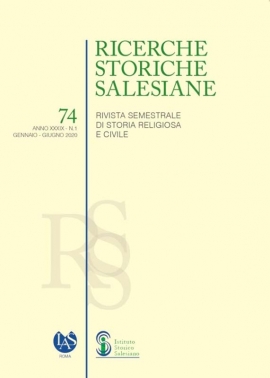 (ANS - Rome) - Issue 74 (January-June 2020) of "Ricerche Storiche Salesiane" (RSS), the bimonthly magazine of religious and civil history, published by the Salesian Historical Institute (ISS) has been published. The magazine now boasts a new, more modern and appealing graphic layout. This issue features two important figures for the Salesian Congregation: Fr Aldo Giraudo, associate member of the Salesian Historical Institute, on the occasion of his 70 years of life, in recognition of his collaboration in Salesian history; and Rector Major Fr Egidio Viganò, founder of the Research and Study institution, in view of the centenary of his birth (July 26, 1920).

The magazine includes three essays in the STUDI sector:

ANCHUKANDAM Thomas, Kristu Jyoti College, Bangalore: The History and Significance of the Opening of the First Salesian Institution in the Archdiocese of Bangalore – the fourth and final part presents Kristu Jyoti College as an institution that offers a significant contribution to both the local Church and the wider civil society.

The second essay is by KIVUNGILA Germain: Le contexte politico-ecclésial du Congo-Belge et la naissance des vocations salésiennes Africaines (1919-1959). Colonial as well as ecclesiastical politics are presented, showing a certain reluctance to the progressive Africanization of institutions. Even among the Salesians it was so and until 1957 there was not a single indigenous vocation. However, the riots of January 4, 1959 give a strong blow towards the change of mentality and indeed, then, thanks to the initiatives of Fr René-Marie Picron, there will be a strong development and promotion of African Salesian vocations.

The third study is by WIELGOß Johannes: Kardinal August Hlond und Josef Heeb – zwei Menschen unter dem dunklen Schatten des Nationalsozialismus - "Cardinal Hlond and Josef Heeb - two people in the shadow of National Socialism" is the title of this study of great historiographic interest. The author managed to reconstruct a totally unknown story of a Salesian pupil, Josep Heeb (1892-1942), who lost his parents at an early age and who got to know the future cardinal August Hlond at the Salesian institute in Vienna. Mr. Heeb, a soldier and disabled during World War I, then maintained an epistolary relationship with the Polish prelate, informing him about the rise of Nazism in Germany - which will ultimately cost him his life.

In the FONTI - SOURCES sector an original text is presented:

Il “sogno” delle due colonne e altre buone notti di don Bosco nella Cronaca di Cesare Chiala (1862) - The "dream" of the two columns and other good nights of Don Bosco in the Chronicle of Cesare Chiala (1862). This is the critical edition edited by Aldo Giraudo, preceded by the historical contextualization and by the profile of the author, Cesare Chiala, who at that time was not yet a Salesian, but employed in the Royal Posts and collaborator of Don Bosco in the drafting of Letture cattoliche and in the catechesis to the oratorians.

As usual, the issue is completed by the contributions accepted in the Notes, Reviews and Reports sections.