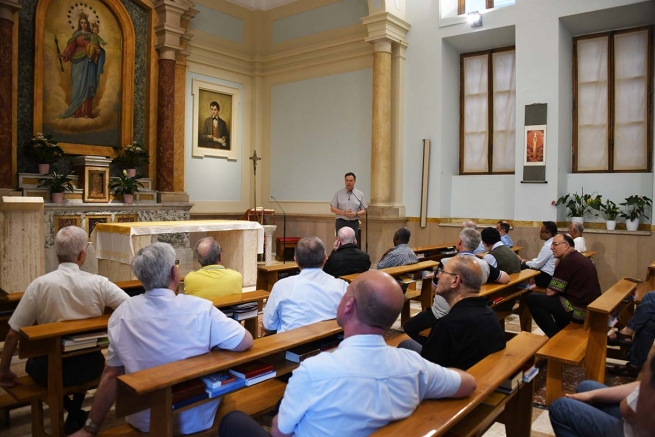 (ANS - Rome) - The General Council elected by the 28th General Chapter completed its summer work session on Friday 10 July. “They were very special meetings: during this pandemic period from Covid-19 we organized the meetings in attendance with the Councilors in Rome and online with those in other parts of the world,” said the Rector Major, Fr Ángel Fernández Artime, in the “goodnight” offered to the Salesians of the Central Office.

Four of the new members of the General Council, due to the lockdown restrictions, were unable to reach Rome; for this reason, the gatherings were defined by the Rector Major as “special and also a little demanding.” Thus, to allow the digital participation of the Directors scattered in other parts of the world, the Board meetings began at noon and ended at 14:00 (UTC +1).

This meant that Fr Giuseppe Nguyen Thinh Phuoc, Councilor for the East Asia - Oceania Region, connected in the afternoon from Vietnam; this, while Fr Hugo Orozco Sanchéz, Councilor for Interamerica, from Mexico; Fr Gildásio Mendes dos Santos, Councilor for Social Communication, from Brazil; and Fr Gabriel Romero, Councilor for the America South Cone Region, from Argentina, were still in the early hours of the morning.

In any case, “they have been very fruitful meetings despite the distances and digital mediation,” said Fr Á.F. Artime.

Among the other activities highlighted, on 27 June the 10th Successor of Don Bosco and Grand Chancellor of the Pontifical Faculty of Educational Sciences “Auxilium” participated in the celebration of the 50th anniversary of the canonical erection of that faculty, in the presence of the Mother General of the Daughters of Mary Help of Christians, Mother Yvonne Reungoat, together with a representative of the academic community - always in compliance with anti-Covid-19 measures.

One of the watchwords of the “good night” thought was: “Thanks to every Salesian.”

“In fact, we thank the Councilors, the community and all those who made emergency services possible in many parts of the world in this moment of humanitarian emergency. In particular,” the Rector Major underlined, “I thank the Dicastery for the Missions for the concrete help to the projects to save human lives and to accompany the poorest in this crucial moment of history.”