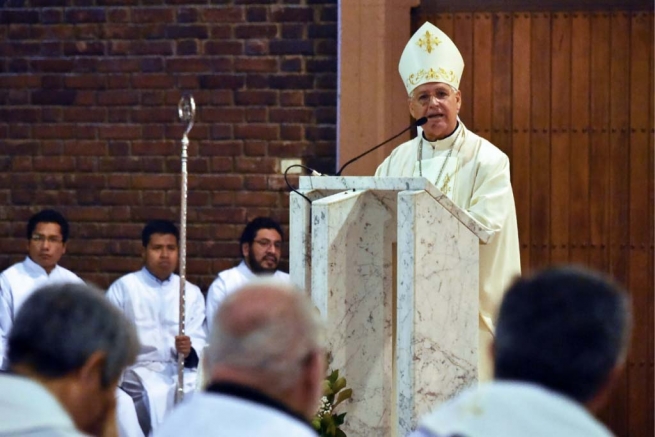 (ANS - Bogotà) - The award ceremony of the competition promoted by the "Fundación Padre Jaime" was held on Sunday 12 July, through Zoom, under the motto "Effective preaching" in homage to the Salesian priests involved in spreading the Gospel. In this event's fourth edition, with 40 votes each, Msgr. Alberto Lorenzelli, auxiliary bishop of Santiago de Chile, and Fr Silvio Cesar da Silva, parish priest of "Santa Teresita" in Sao Paulo, Brazil, were awarded.

The "Fundación Padre Jaime" is a foundation created in 2009 to remember the figure and carry on the mission of Fr Jaime Rodríguez Forero, SDB, who centered his entire priestly life on the Eucharist and pastoral action, and who was also a professor and researcher in fields such as theology, sociology, and bioethics. Taking this Salesian priest as a model, the foundation promotes and supports the Salesian religious who are preparing for the priesthood.

In order to offer Salesian clerics a good search for references, and to encourage them to preach with their hearts, in 2017 this competition was established, its aim to identify those religious who share the peculiar priestly characteristics of Fr Jaime Rodríguez Forero.

In 2017, Fr Tomás Jordán was awarded for his accompanying the sick; In 2018, Fr Jorge Atarama for his commitment to Salesian historical research in Peru; and in 2019, Fr Alejandro Moreno for his pastoral contribution.

During the ceremony on Sunday, Fr Martin Pongutá, Salesian priest of the "San Pietro Claver" Province of Bogota, underlined the significance of the prize awarded to Msgr. Lorenzelli, motivating it with the closeness he shows in sharing the Gospel. "Very pedagogically, he presents us with the method by which to prepare to preach having a lifestyle close to the mission entrusted to us by the Lord."

For his part, the auxiliary bishop of the archdiocese of Santiago gave thanks for the invitation to the meeting, which he called "beautiful and meaningful" for the opportunity to "meet each other as a Salesian Family". The prelate also highlighted the harmony between the value of the prize and the Gospel of the day, which invited precisely to reflect on the message of God. “It is necessary to sow this Word and put the seed in good soil. The first good ground is made up of each of us. If that Word reaches us and arrives within us, then it can bear fruit, and the announcement is being able to make alive and communicate what the Lord tells us," he said.

Words of praise were also spent for Fr Silvio Cesar da Silva, who also won the prize awarded by the "Fundación Padre Jaime". Finally, the meeting ended with a serenade animated by local musicians and the presentation of a commemorative coin.

The closing words were spoken by Rosemary León Buitrago, founder of the organization, who asked "to take care of your priests."