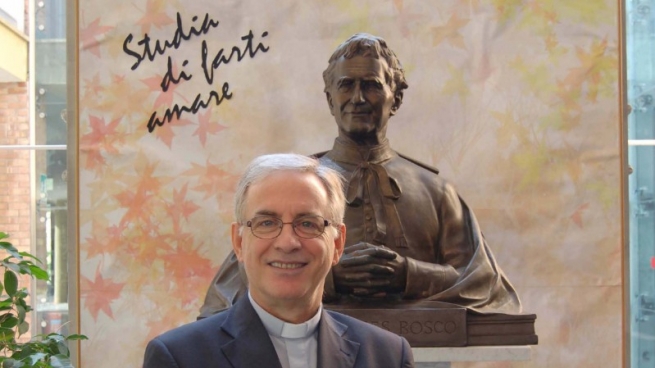 The sad announcement was given by Fr Alvaro Forcellini, director of the Salesian community of the parish of Santa Maria della Speranza, adjacent to the UPS campus, where Fr Carlo had been transferred in September 2018. Here, Fr Carlo had primarily dedicated himself to the parish ministry while continuing to provide his service to the UPS until the start of the pandemic-related lockdown.

Last May his health conditions, following the fracture of his femur and his subsequent hospitalization, began to raise serious concerns, highlighting the advanced state of a serious illness that led him to conclude his earthly journey.

He began his teaching activity in the Faculty of Educational Sciences starting from the 1976/1977 academic year with lessons relating to the philosophical part of the General Theory of Education course; from that moment his appreciated and passionate university teaching was constant until this academic year. Fr Pietro Braido (UPS Rector in the years 1974-1977) indicated Fr Carlo as his successor in the Chair of Philosophy of Education.

In 1980 he took on the position of Co-director of the magazine "Orientamenti Pedagogici" and Pro-Director of the Institute of Pedagogical Methodology, the following year as Secretary of the Faculty. Appointed associate professor on 8 September 1984, he was promoted to Full Professor in the Faculty of Educational Sciences on 8 September 1989; for many years he was the youngest professor at the university. In 1992 he was appointed Vice-Dean of the Faculty, and on April 24, 1995, he began his first term as Dean, then reconfirmed for a second three-year period (1998-2001) on April 24, 1998. He was again appointed Dean of the Faculty of Educational Sciences during the summer of 2008, an assignment that lasted only for a year, until with the Decree of the Congregation for Catholic Education dated 5 June 2009, he was appointed Rector of the UPS from 1 July 2009 until 15 July 2015.

In addition to the teachings of his professorship, Fr Carlo Nanni, much followed by students, and occupied with other teaching assignments outside the UPS at the Diocese of Rome and the University of Perugia, also worked on the curricular reform of the CNOS/FAP vocational training centers. From 1999 to 2012 he was also Central Ecclesiastical Consultant of UCIIM, the Association of Catholic teachers of middle and high school. He also offered a valuable and competent contribution for the elaboration of important documents, of the Italian Episcopate and of the Congregation for Catholic Education.

On completing his double mandate as magnificent Rector of the UPS, and awarded by the Grand Chancellor of the UPS, on 20 October 2015, on reaching his 70th birthday, the title of Emeritus Professor of the Faculty of Educational Sciences of the UPS, Fr Nanni continued his service for the University through teaching, the Directorate of the UPS Historical Archive and the Co-direction of the magazine "Orientamenti Pedagogici".

It is unanimously acknowledged that the six-year term of Fr Carlo Nanni's Rectorate was characterized by a truly Salesian style, made of attention to students, to the personal and professional life of colleagues, to the promotion of relational and procedural styles institutionally that were always proper, upright, animated by a true family spirit and his promoting co-responsibility at all levels.

The funeral will take place on Tuesday 21 July at 11 am in the Church of Santa Maria della Speranza in Via Francesco Cocco Ortu, 19, Rome.