RMG - The ANS site: to share the good things that the Salesians are doing in the world 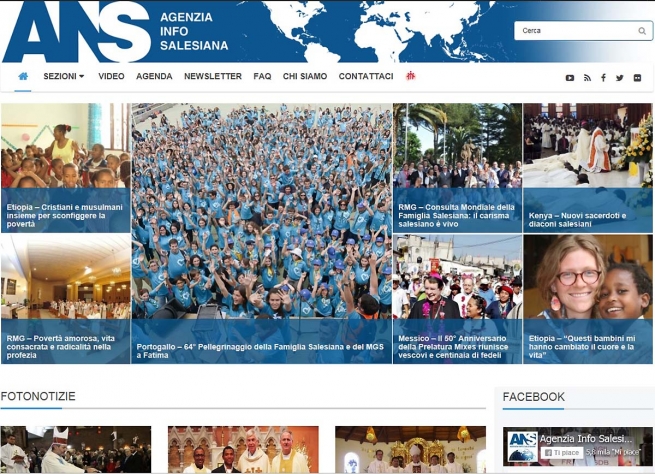 (ANS - Rome) - New logo, new interface, better integration between text, images and video, a renewed focus on the socialization of messages ... Since 15 March last the site of the Salesian Info Agency has changed radically. Alongside the innovations there are still a few proven instruments, such as the photographic archive "IMAGE BANK".  The mission is the same: "to share the good things" that the Salesians are doing in the world and in this way to be a tool for the spread of the charism.

Social networks have taken on a role of great importance in communication and from being simply a channel for the dissemination of publications they have become an open space for readers. They are being used increasingly. For example: since 31 January 2015, the Facebook page of ANS has received nearly 6,000 "likes" and the involvement of users, at peak periods during the Bicentenary, was impressive, with a peak of 140,000 people reached.  The dozens of videos presented on ANSChannel, YouTube, have achieved in total over half a million viewers. The different Twitter profiles now have in total more than 4,500 followers; and Flickr in 16 months has already shown over 14,000 photos.

The windows of ANS in the major social networks are now well in evidence in the homepage of the new website, to the right of the screen.

But it is worth noting that in the same right-hand column of the home page there are also other elements, already present on the previous site and still active: the box to subscribe to the daily newsletter, available in 6 languages which together reach nearly 4,000 loyal readers; and the banner to access IMAGE BANK, the digital photo archive holding approximately 12,000 photos, from the years between 2001 and 2015, from around the world.

For archival research the previous site is still accessible via a dedicated link from the footer - the section in black at the bottom of the new site.

Yesterday, like today, and tomorrow, ANS aims to be an "on-line communication bridge" and a window through which we see the mission of the Congregation in the world.