Peru – July 29: 100 years of Basilica of Mary Help of Christians in Lima 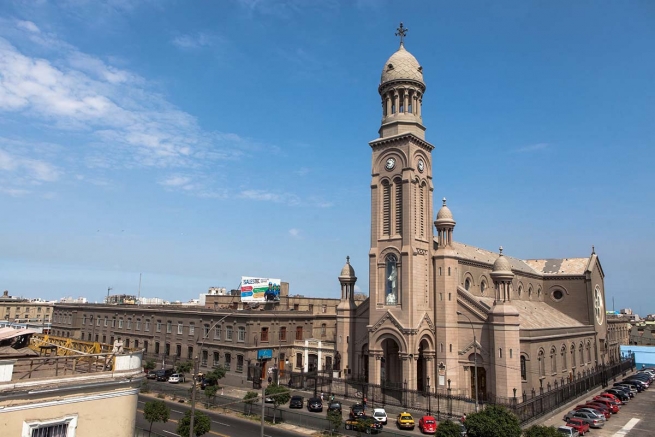 (ANS - Lima) - Sunday 26 July, in an atmosphere of joy and gratitude, the opening of the celebrations for the Jubilee centenary of the Basilica of Mary Help of Christians in Lima, the cultural and historical heritage of the city of Lima, was celebrated. The ceremony included a solemn Eucharist presided over by Msgr. Carlos Castillo, Archbishop of Lima, and concelebrated by several Salesians, including the Provincial Vicar, Humberto Chávez, SDB, and Fr Santo Dal Ben Lava, parish priest of the Basilica.

The Basilica of Mary Help of Christians in Lima was offered to the Peruvian Church and to all citizens as a "National Homage for the Bicentennial of the Independence of Peru". The offer was made, on behalf of the Salesians of Peru, by Fr Santo Dal Ben, parish priest of the Basilica, and symbolically handed over to the archbishop of Lima, Msgr. Castillo. The moment occurred during the opening Eucharist of the jubilee year for the centenary of this Marian shrine.

During his speech, Fr Dal Ben recalled that the basilica was inaugurated on 29 July 1921 as a "National Homage for the Centenary of Independence". This title was signed in 1916 by Msgr. Angel Jacinto Scapardini, the Pope's Apostolic Delegate in Peru at the time; and was reconfirmed by Msgr. Pedro Manuel García Naranjo, then archbishop of Lima. To their enthusiasm was added that of the bishops of other dioceses in the country who sent financial contributions for the construction of the temple and thus confirmed the national connotation of this basilica.

In the speech with which he renewed the offer, Fr Dal Ben also recalled the condition of the church as the only temple of basilical rank in the country: “After its recent restoration, we find no better way to start this jubilee year for its centenary than renew the vow of gratitude that motivated its construction. For this reason, in front of Msgr. Carlos Castillo, Archbishop of Lima and Primate of Peru, we offer, to all the Peruvian Church and all citizens, the Basilica of Mary Help of Christians, completed and restored, as a 'National Homage of Gratitude to God for the Bicentenary of the Independence of Peru'. And with this, we also offer the work of all those who, over the course of a century, have made this Basilica a monument of gratitude for the freedom of Peru."

At the end of the Eucharist, Msgr. Castillo signaled the possibility that the Bicentenary Te Deum, on July 28, 2021, would be celebrated in the Basilica of Mary Help of Christians, in consideration of its condition as a historic patriotic and commemorative temple of the Peruvian Republic.

Photo Gallery of the Basilica

History of the Basilica