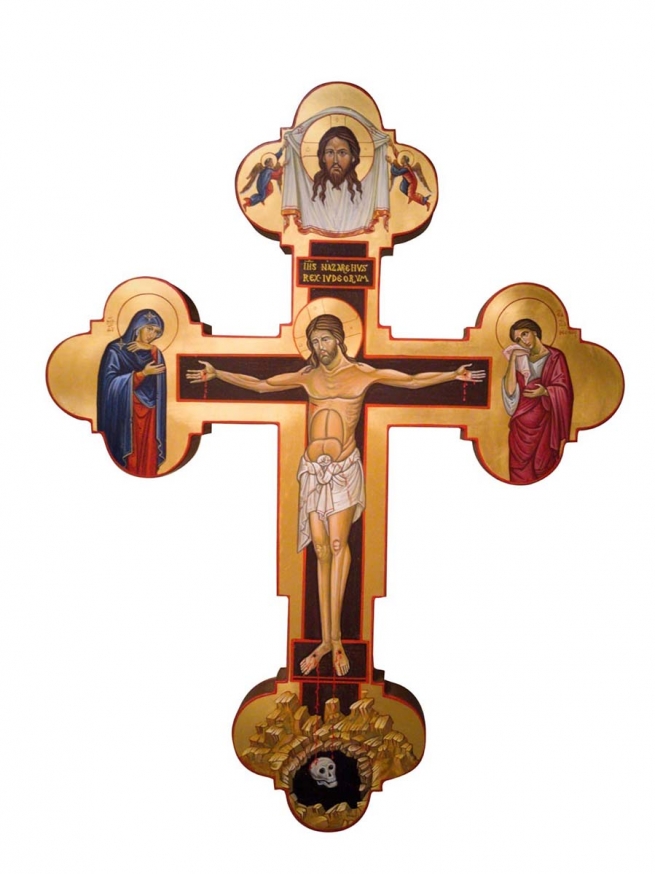 (ANS - Tivoli) –  A processional luminous cross by the iconographer Domenica Ghidotti was blessed on the occasion of the 48th anniversary of the death of the Servant of God Msgr. Giuseppe Cognata, (22 July 1972). It coincides this year with the announcement of the consent of Pope Francis to the opening of the cause of beatification and canonization of the Salesian bishop. The blessing took place in the Mother House of the Salesian Oblates of the Sacred Heart (SOSC) in Tivoli.

In the front part of the Cross, in the center, there is the "Christus patiens". Represented at the ends are the Virgin of Sorrows and Saint John the Evangelist, witnesses of the crucifixion and models of participation in the sufferings of Christ. In the coping, we see the "Mandylion", with the holy face of Jesus, supported and honored by two angels. The precious blood that flows from Christ descends to redeem the earth and men from sin, starting with the first man-sinner, Adam, represented by the skull placed at the foot of the Cross.

At the rear of the Cross, in the center stands the figure of Jesus surrounded by the saints to whom Monsignor Cognata was inspired in his episcopal ministry and in the foundation of his congregation: Saint Paul the Apostle, Saint John Bosco and Saint Francis of Sales. At the feet of Jesus is the episcopal motto of Mons Cognata: "Caritas Christi urget nos". In the lower part, the heavenly Jerusalem is depicted. Here a relic of the Holy Cross has been set, supported by a Cherub.

At the beginning of the celebration, presided over by Fr Gaetano Saccà, Mother Graziella Benghini, Mother General of the SOSC, illustrated why this icon of the Cross was commissioned.

In his homily, Fr Pierluigi Cameroni, Postulator General of the Causes of Saints of the Salesian Family, said: “Being true disciples of Jesus means going along a path that goes against the current to the point of making us become people who, with their lives, question society, people who annoy, make trouble. Monsignor Cognata is one of the Lord's disciples who has been persecuted for having lived his commitments with God and with others. After receiving the sentence in which the Holy Office deprived him of episcopal functions, Msgr. Cognata wrote to one of his most faithful collaborators, prof. Anna Vultaggio: 'We are at the last act of Calvary: on the Cross, Jesus consumed what he wanted to suffer, showing himself dead as defeated: but later, the triumph of the Resurrection. The Master also associated me with this last act to hasten the triumph of his Oblates in which my resurrection will also be ... So, my daughter, we are at burial! It is the time of the last test; we know how to support it in silence, abandoned to the Heart of Jesus ... Let us keep ourselves at work and triumph in the Name of Jesus, suffering and overcoming trusting in the Master ... Do not worry about defending me; there is the Lord for this.'"

It is worth remembering that Monsignor Cognata ended his earthly journey in Pellaro (Reggio Calabria) in the place where he had started the foundation of the SOSC in 1933, starting in a certain way from where it all started.