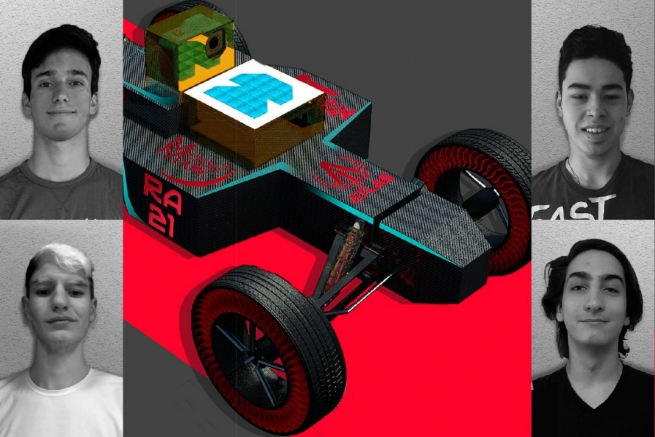 Left: above, Nicolas Macullan; below, Francisco Yennacaro. Right: above, Pablo Molina Ruiz; below, Federico Muzzio. In the center, the rendering of the vehicle that will be sent to the moon.

(ANS - Buenos Aires) - Four Salesian students from Buenos Aires have won a competition organized by NASA: their car will participate in the first race to be held on the Moon.

Nicolás Macullan, Pablo Molina Ruiz, Federico Muzzio and Francisco Yennacaro are students of the fifth year of the Technical Institute of the Salesian house "León XIII", as well as the members of the "Atlas" group. Their project was chosen from 35 other projects from 11 countries to participate in the first race to be held on the Moon, a race organized by the "Moon Mark" group, scheduled for October 2021, and sponsored by NASA.

The students already knew each other at school and had already worked together. For this project, they divided their tasks: Nicolás took care of the ideas for the car's suspension; Pablo, the 3D design and software; Francisco did research on the moon's natural conditions; while Federico took care of the necessary calculations.

The pace of work was challenging. The competition lasted a month, and there was a [task] consignment to be made every week. "In the last two weeks we have been fighting against time ... We thought we were done, and we realized that something was missing ... And we had to start over," recalls Pablo.

Yet, comments Francisco, "It was really fantastic ... The experts were surprised to see that seventeen-year-olds were able to do in four weeks what many Engineering students take several months to do."

The natural conditions of the Moon, where temperatures vary from –100° C to +100° C, were one of the great challenges. "We rushed to read a NASA manual on the production of microsatellites, looking for ideas," says Nicolas.

It was at the Salesian school that the four learned about 3D design and engine operations, but also about the right method to face this challenge. “They taught us to work on projects, for real life. And they gave us the values ​​to work in a group," adds Nicolás.

“Constancy, organization. If you have a delivery to be made in two weeks, start working today,” says Federico. They will also have next year to put all this, and much more, into practice, given that they still have one more year of secondary school.

Each week the students had to send a video with the project's progress. Here's last week's.

To find out more about the "Atlas" team, see their Instagram profile; while for next Monday, August 3, a live interview is scheduled on the YouTube channel of the Salesian Bulletin of Argentina (18:00 – UTC-3).