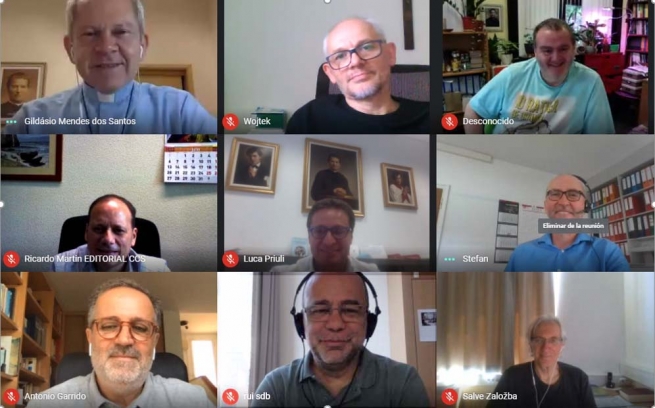 (ANS - Rome) - The online meeting of the leaders of the Salesian publishing houses in Europe was held on 29 July, chaired by the General Councilor for Social Communications, Fr Gildásio Mendes dos Santos. The topics dealt with, on the one hand, how the publishers dealt with the Covid-19 crisis, the way in which confinement affected them, the effects on sales ... And on the other, how they prepare to face the future.

During the meeting, and generally speaking, it emerged that all firms suffered the condition created by Covid-19 - some more, others less. Most publishers decreased production while waiting to see the situation evolve, while others have adopted innovative ways to overcome the lack of sales. Publishers who depend on bookstores and parishes have seen their orders drop, but some have decided to take advantage of progressive digitalization, especially teaching. And on the other hand, online selling was another tool that in some cases turned out to be positive. For some, it was not easy even to adapt to work from home, but other editorial managers commented that they had discovered in this modality a new way of working that was more positive than they had previously thought.

As for the future, everyone hopes that the opening of bookshops and schools will resume in a strong fashion in September and, above all, that the arrival of orders will start and help reduce the expected losses in total turnover. However, nobody knows exactly what to expect.

In conclusion, the General Councilor for Social Communications encouraged everyone to adopt a creative attitude, just like Don Bosco, who knew how to adopt innovative paths to overcome difficulties. "This is what the Salesian publishing houses are called to do today: to seek new ways of communicating among us to ensure that the Salesian community is involved in our productions. And also to think of solutions that not only make us think about problems, but also make us look to the future with courage and positivism," he said.