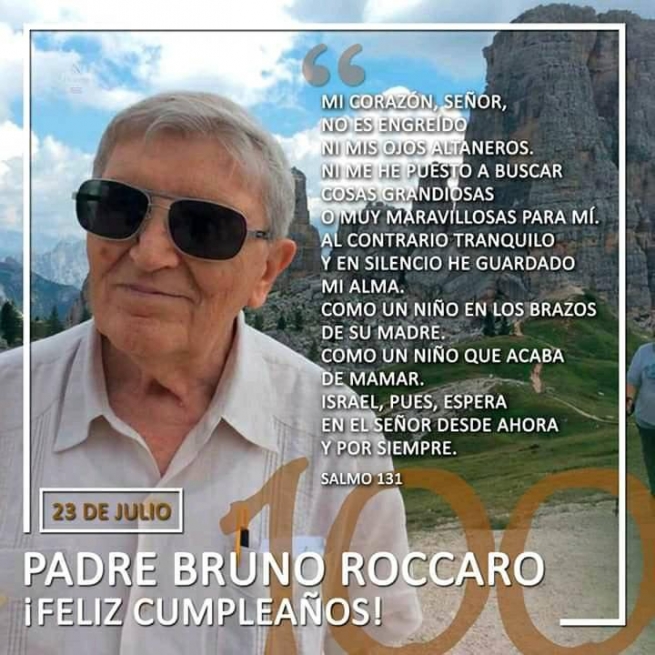 (ANS - Santa Clara) - The Salesian priest Bruno Roccaro, born in Italy, but a missionary in Cuba for half of his life, celebrated 100 years of life on 23 July. To celebrate it, on the same day, a Eucharist was celebrated at the parish of Our Lady of Carmel, during which Fr Roccaro himself preached the homily.

“A man of God. Fully Cuban. A tireless missionary in the villages of Guamá, in eastern Cuba, a lover of the mountains, art and literature, passionate above all of the young,” his confreres defined him on social networks.

The Mass for his birthday was celebrated by Fr Roccaro himself. In his homily he indicated how this anniversary is an act of thanksgiving for all the people who have shared this path with him and helped him get to where he is now.

"What little I have done in my life, I have not done it alone, is not my work, but of the many who have helped me," and in the first place God, he underscored.

The priest thanked his family, who always accompanied him during his priestly life, all the people of his hometown, Scorzé, the Salesians, thanks to whom he was able to finish his studies and find the way to the religious vocation, and his brother priests with whom he spent many years in Cuba, where he was sent as a missionary 50 years ago.

The priest also emphasized that, in this period, it is necessary to build bridges between Catholics themselves, and asked the faithful to be "seekers of God." "I find it very difficult to think that two people of religious life cannot agree, that they are enemies, opposites," he said.

Fr Roccaro also stressed that obedience is essential in life, thanks to it the apostolate becomes fruitful. "Because it's not what I choose, but what I'm told, what God wants," he said. Here is "not only peace, fruitfulness, but also happiness," he added.

Finally, the priest asked the faithful to pray for him so that "when God wills it, he can meet this God, this mystery that I have so often wanted to know in depth."