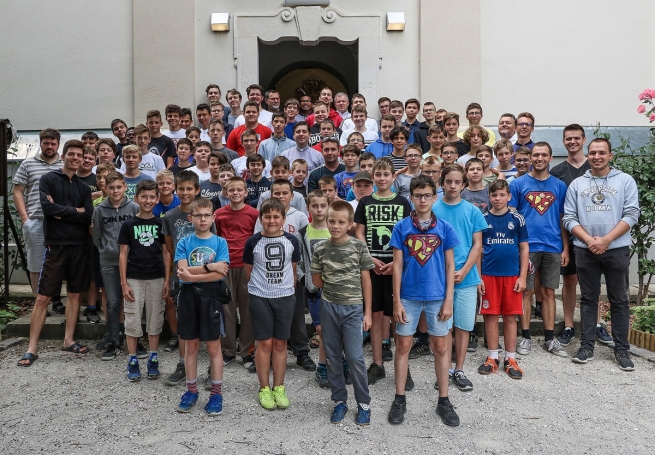 (ANS – Budapest) – Altar servers camp is one of the oldest summer camps conducted in the Salesian Province of Hungary. After the fall of communism, the Salesians resumed youth ministry by organising altar servers camp for boys following the footsteps of founder Don Bosco who began his mission with an altar boy. This year is the 26th year of the camp being organised.

In the past years, it has been noted that among the participants some have become priests and religious. Hence the Salesian fathers and brothers consider this camp as one of the special occasions for vocation promotion and therefore quite a few of them interacted with the altar servers and accompanied them as team leaders.

About 100 participants took part in the camp which was held on July 14-18. Fr. Kirner Zoltán SDB who celebrates his silver jubilee of his priestly ordination this year was the spiritual director of the camp. The goal of the live-in camp is to emphasize more on liturgy and to relax in having fun activities. The spiritual director of the camp gave everyday formation session on the theme: 'Behold, the mystery of faith'. Lots of workshops, sport and skillful activities were conducted in order to strengthen the team building because the team members come from different non-Salesian parishes. The winning team was given the Alter Servers Cup which has been named after Blessed Stephen Sándor, the Hungarian Salesian martyr brother.

The Best Altar Server of the camp was awarded with the statue of Saint Dominic Savio, the patron saint of the altar servers. The participants evaluated this camp as a useful, helpful and joyful venture of the Salesians. Hats off to the ex-provincial Fr. Ábrahám Béla SDB and the present provincial Fr. Andrásfalvy János SDB for their support.