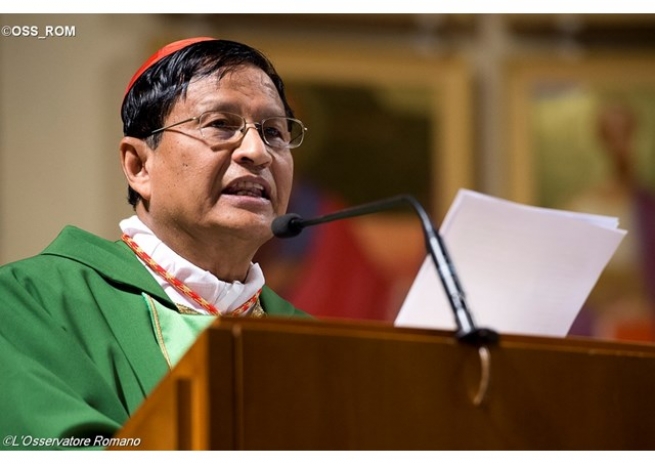 (ANS - Brussels) - Freedom of religion and conscience in Myanmar, the plight of the Rohingya, the redistribution of natural resources, widespread poverty, trafficking in human beings and the vast opium production ... these are the many serious issues addressed by the Salesian Cardinal Charles Maung Bo, archbishop of Yangon, in the conference he held at the headquarters of the Commission of the Bishops of the European Community (COMECE) in Brussels on Tuesday 24 May.

Cardinal Bo was invited to talk about his country, Myanmar, before European parliamentarians from different political parties, in a conference organized by "Aid to the Church in Need", "Missio", "Christian Solidarity Worldwide" and COMECE.

"We are people of the resurrection, a new dawn is born. There is hope in Myanmar," said the cardinal. However he did not fail to mention the current challenges facing the country: the need to strengthen democracy, the protection and promotion of human rights, the fight against poverty in the education system, the prevention of ethnic and religious conflicts and the promotion of justice, dialogue and reconciliation.

He described the plight of the Rohingya as particularly worrying. They are a minority group of Muslim faith who are under increasing repression and are now threatened by a new law under discussion in the Parliament, which would divide the citizens according to ethnic and religious profiling. That would result in denying the Rohingya and other minorities the right to citizenship.

Cardinal Bo stressed that to overcome all the challenges that lie ahead Myanmar needs the support of the EU and the international community. And in this context he also recalled how the Catholic Church in the country is very active in promoting peace and reconciliation through interfaith dialogue and supporting equal citizenship and equal rights for all.