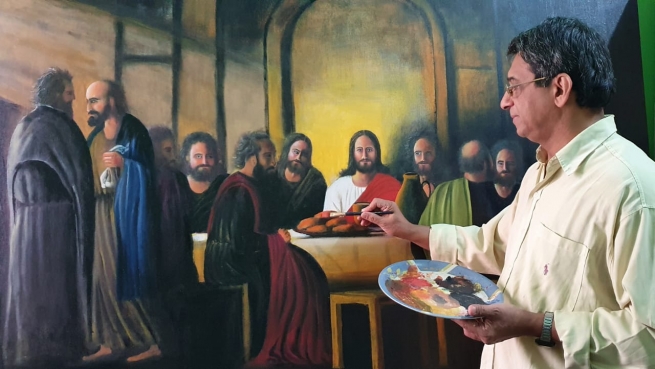 (ANS – New Delhi) – The paintings of Salesian Brother Mathew John Puthanangady, of the Salesian Province of New Delhi [INN], depict a wide range of style, subject matter and fine technique of oil painting, which has helped him achieve international recognition. The various pictures of landscapes and biblical personalities painted by Mathew John are considered masterpieces and they adorn the walls of Don Bosco Institutions in India and abroad. Recently he has ventured forth, with excellent results, with a pictorial theme of ancient tradition and with which even the greatest artists of every era have challenged themselves: the Last Supper of Jesus.

Bro. Mathew John was trained under Elio Lago, an Italian artist who teaches art and culture at Istituto Salesiano San Zeno, Verona. However, Mathew is more inclined to Rembrandt’s style of paintings, his approach to composition, colour usage and his play on light and shadow. Large areas of his paintings are obscured in shadow or in dark tone but the little streaks of colour here and there give life to the painting.

Art curator and critic Uma Nair says: “The Last Supper is the most talked-about painting in the world. Bro. Mathew brings Leonardo da Vinci forward into the modern millennium by creating a contemporary masterpiece in which the participants belong to Today. What is brilliant is his composition and his translation of the spiritual expression alongside the realism of dimension.”

Mathew John completed a training in printing technology in Chennai, went on to do an advanced course in pre-press technology in Verona, Italy. On his return in 1995, along with 2 other Salesians, he started the Bosco School of Printing in New Delhi. In the year 2000, to celebrate the 125th year of the First Salesian Expedition to Argentina, the then Rector Major Father Juan Edmundo Vecchi invited at least 2 Salesians from each province to be part of this mission. Bro. Mathew John offered himself willingly for this extraordinary event and went to Nigeria. Already in Nigeria, he used to spend his free time in painting and giving expression to his artistic skill. Besides painting, his other skills and interests include 2D-animation, 3D-modelling and 3D-animation, graphic design and photography.

Archbishop Osvaldo Padilla, Apostolic Nuncio of Nigeria, was so impressed by Mathew’s paintings that he requested him to make 4 typical African scenes for the Vatican Embassy in Nigeria. In 2002, at the request of Istituto Salesiano San Zeno for a 3D-modeler and animator, he moved to Verona. In 2008 he won second prize for “Il ragazzo del sogno”, an animation movie in the Youtube category at the International Catholic Film Festival held in Niepokalanów, Poland.