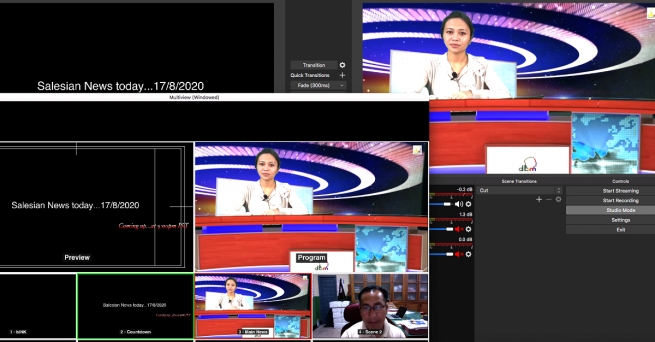 The platform is also present on other social networks, in particular on Facebook, where it transmits news and live streaming on a daily basis. Currently the page has more than 3,100 followers and is constantly growing. Starting from August 2020, a team of young people, under the leadership of Fr Michael Makri, Salesian, provincial delegate for social communication, have been meeting to gather and transmit news and multimedia content to the public.

Fr Micheal Makri himself, director and editor-in-chief of the channel, said he had communicated in recent weeks with Fr Gildásio Mendes dos Santos, General Councilor for Social Communication, and with Bro. José Luis Muñoz, SDB, Editorial Director of ANS, and that both strongly encouraged him to move forward with the project. The Provincial of the INS Province, together with the entire Provincial Council, also back and support him.

The work of the Don Bosco Media Network was started, initially, with little means but is now improving and growing gradually. The YouTube channel aims to broadcast live local news from all over the state of Meghalaya starting from September 1 this year. The Meghalaya Government has in fact believed in the project and, through the Directorate of Information and Public Relations, is enhancing the platform.

It is undoubtedly a great achievement for the whole team, who also wanted to express heartfelt thanks to the Rector Major, Fr Ángel Fernández Artime, for having believed in and encouraged the project.

Don Bosco Media Network is a precious resource also for ANS itself and is a valid example of collaboration and exchange of information: a collaboration that, once the difficult moment we are experiencing is overcome, aims to broaden and expand even further.

For more information, you can visit the YouTube channel "Don Bosco Media Network" and their Facebook page.