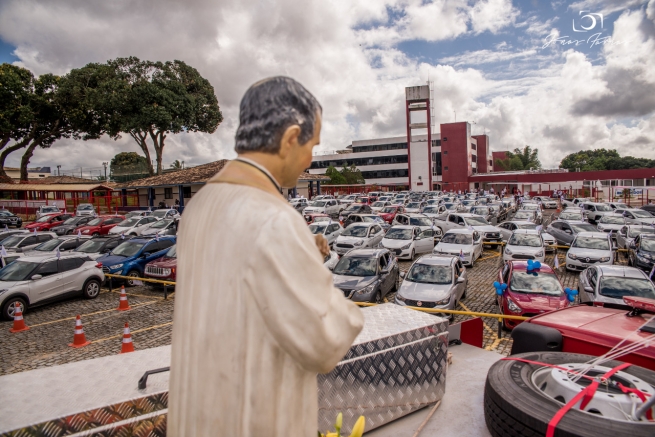 (ANS - Salvador de Bahia) - Last 16 August, the day of the 205th anniversary of Don Bosco's birth, the Salesians of Salvador de Bahia wanted to celebrate and pay homage to our founder with a true demonstration of faith and charity. This year, in respect of social distancing, a Carreata, a procession of cars, was organized to celebrate the Father, Teacher and Friend of Youth.

During the morning of August 16, the cars arrived with families, parents, students, collaborators and educators from the two teaching units, as well as with many faithful from several parishes of Salvador de Bahia. Following the safety protocols, the families left their food donations, placed the identifying flag, already sanitized, in honor of Don Bosco and followed the procession, always from inside their vehicles.

The procession initially met at the Colégio Dom Bosco in Avenida Paralela, and it was a truly emotional and moving moment, with families and young people who met again after a few months of lockdown and isolation.

Fr Jonathan Loureiro, the coordinator of the Salesian Pastoral of Colégio Dom Bosco, began the blessing of the procession and later, Fr Eudes Barreto, director of the Salesian presence in Salvador de Bahia, wanted to thank the community for their massive participation and then asked for a minute of silence to commemorate the victims of Covid-19. A prayer was then dedicated to the victims of the coronavirus.

The Salesians of Bahia wanted to express their heartfelt thanks to the Superintendence of Traffic, the Fire Brigade, the Police and all those who participated and who made this Carreata a historic moment for the Salesian presence in Salvador de Bahia.