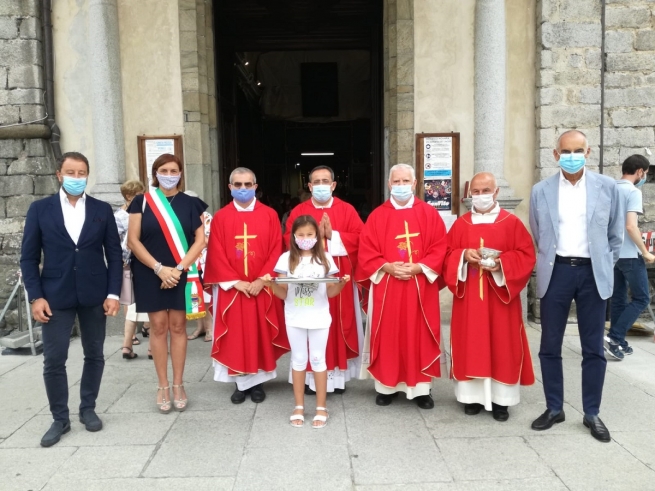 (ANS - Omegna) - On the occasion of the 150th anniversary of the birth of the Venerable Andrea Beltrami (1870-1897) in Omegna (Verbania), his hometown, among the various initiatives organized are the blessing and inauguration of the renovated square dedicated to him. The square is located in front of the Collegiate Church of St Ambrogio where the remains of the young Salesian priest are kept. On Sunday 23 August, after the solemn Eucharistic celebration, presided over by Fr Pierluigi Cameroni, Postulator General, the inauguration of the square followed in the presence of the city authorities and the parish priest Fr Gianmario Lanfranchini.

In his homily, Fr Cameroni underlined the message that is thus publicly delivered to the civil and ecclesial community of Omegna through the dedication of one of the town's central squares to Fr Andrea Beltrami: "Find the courage to embrace all the difficulties of the present time, abandoning your worry for a moment to give space to the creativity that only the Spirit is capable of arousing. Find the courage to open spaces where everyone can feel called and allow new forms of hospitality, fraternity, solidarity. In the cross of Christ, we were saved in order to welcome hope and let it strengthen and support all the possible ways that can help us to safeguard and keep us. The restored square, a meeting and welcoming place, is a sign of hope that frees from fear and gives confidence and a future especially to the new generations."

Fr Beltrami's testimony confirms Don Bosco's affirmation: "there is only one Beltrami", as if to indicate the originality of the holiness of this son of his in having incarnated the secret nucleus of Salesian apostolic holiness: the fruitfulness of pain lived and offered out of love. He made a helm of his cross, a hope of his suffering, so that nothing and no one could separate him from the redeeming love of Christ. In the midst of the isolation in which he suffered from the lack of meetings and experienced the lack of many things, he listened to and witnessed the announcement that the Lord is risen and lives next to us.

Father Beltrami was in Turin-Valsalice between 1888 and 1889, and in this period he met the Polish prince, now blessed, August Czartoryski. "He, the prince, soon falls ill with tuberculosis," explains Fr Cameroni, "and it is Father Beltrami who acts as his guardian angel." A few years later - February 20, 1891 - Beltrami contracted the same disease, which led him to a progressive consumption and forced isolation. Finally, in 1893, the priestly ordination arrives. "February 20 is the anniversary of my illness: and I celebrate it as a day blessed by God; auspicious day, full of joy, among the most beautiful of my life." He died in Turin on 30 December 1897 at the age of only 27.