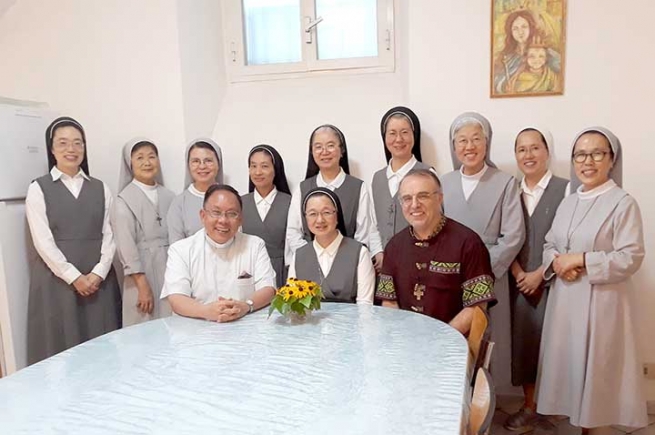 (ANS - Rome) - Among the groups of the Salesian Family, there are not many with their headquarters in Rome. Probably the last to find its general house in the "Eternal City" was the Caritas Sisters of Jesus Congregation. Since their foundation in Miyazaki (Kyushu Island, Japan) in 1937, until ten years ago, their headquarters was in Japan, while their current address is in Rome.

One year ahead of their General Chapter, scheduled for April 2021 in Beppu, Japan, the Sisters of Charity of Jesus are ready to deepen their apostolic consecrated life, characterized by profound missionary zeal and openness to new cultures. It is no coincidence, in fact, that one of the three themes of the General Chapter of 2021 will be that of "intercultural relationships".

The 927 Caritas Sisters, with Sr. Teresia Furuki Ryoko as their Superior General, are grouped into four Provinces (Japan, Korea-Gwangju, Korea-Suwon and Korea-Seoul) and two Vice-Provinces (Brazil and Peru-Bolivia). However, in the last twenty years, after obtaining the recognition of Pontifical Right in 1998, the strong missionary drive towards new frontiers is at the forefront. In fact, many other new missions have been entrusted to the 6 circumscriptions. Also, this year three new missionaries were sent to the African continent: 2 communities in South Sudan and one in Uganda.

The Province of Japan is reaching out to Germany, Italy, Vietnam and the Philippines; Korea-Seoul is reaching out to Papua New Guinea, Australia and the Philippines (Quezon City); the Korea-Suwon Province, on the other hand, is reaching out to the United States (State of California) and Argentina. The sisters who are part of it come from 16 different countries and therefore the intercultural dynamics are becoming more and more important. Although most of the 927 members are mostly from Japan and Korea, the faces of the new aspirants are already showing a global image of the Sisters of Charity of Jesus.

The fact that their web portal publishes in six different languages ​​is also a testament to their constant effort to foster communion in diversity.