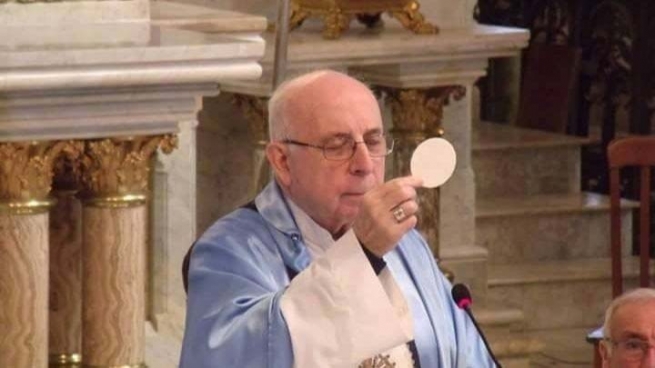 (ANS - Junín) - With deep sorrow, the Salesians of Argentina share the sad news of the death of Msgr. Agustín Roberto Radrizzani, SDB, which took place in the early hours of yesterday, September 2, at 1:25 am. He had been hospitalized on the morning of 1 September due to a feverish condition. The cause of his death was respiratory failure due to bilateral pneumonia, while he was awaiting the results of the Covid-19 swab.

Mons. Radrizzani was born in Avellaneda on 22 September 1944. He entered the Salesian novitiate of San Justo; on 31 January 1962, he made his first religious profession. He continued his Salesian formation in Bernal until, in 1969, he was sent to Turin for theological studies. He remained in Turin until his priestly ordination on 25 March 1972, which took place by the laying on of hands and consecratory prayer of Cardinal Michele Pellegrino, archbishop of the city at the time.

On his return to Argentina, he carried out his activity in the formative and pastoral field in the “San Miguel” house in La Plata and in Avellaneda.

In 1982 he was appointed Provincial of the "Our Lady of Luján" Province based in La Plata and, after his mandate ended, in 1988 he took on the position of Novice Master.

On 14 May 1991, he was appointed bishop of Neuquén by Pope John Paul II, succeeding bishop Jaime De Nevares. Later, on 20 July of the same year, he received episcopal ordination from the hands of Msgr. Argimiro Moure, bishop of Comodoro Rivadavia at the time. As an episcopal motto, he chose: "We believed in love". On the following 17 August, he assumed the direction of the diocese of Neuquén.

On 24 April 2001, John Paul II appointed him bishop of the diocese of Lomas de Zamora, which he took over on 23 June of the same year, succeeding Msgr. Desiderio Collino. At the time he was the second vice president of the Argentine Episcopal Conference.

He was then appointed archbishop of Mercedes-Luján on December 27, 2007, and began his pastoral ministry on March 29, 2008. In 2019, at the age of 75, he left the direction of the archdiocese and went to live with his mother at the “Hogar San José” in the city of Junín, served by the Little Sisters of the Abandoned Elders of Saint Teresa of Jesus Jornet.

Bishop Radrizzani left this land with 75 years of age, 58 of Salesian religious life, 48 of priesthood and 29 of the episcopate.