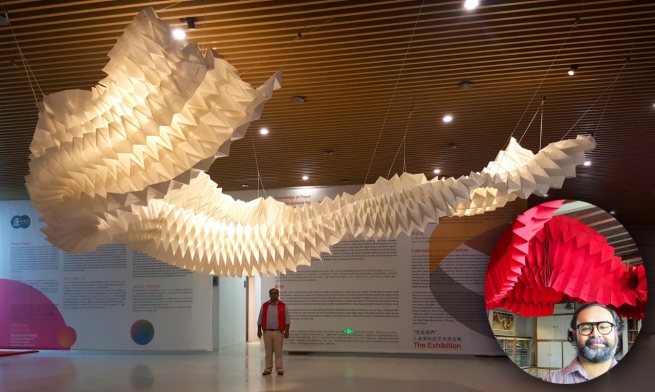 (ANS – Roma) – Don Bosco Alaknanda New Delhi alumnus, Ankon Mitra, an architect and artist of international repute and the recipient of the All-India Gold Medal for Sculpture in 2018 from the Prafulla Dahanukar Foundation, has won the prestigious “Lexus Design Award India 2020” for Craft Design.

Ankon Mitra, the topper of his batch in the year 2000, studied architecture at the School of Planning and Architecture, New Delhi and graduated with a distinction and a University Gold Medal. He went on to receive an MSc. in Adaptive Architecture and Computation from the prestigious University College London, magna-cum-laude. His work has been exhibited in India, Italy, France, UK, USA, Japan and at the Shanghai International Paper Art Biennale in 2019. He is a member of the British Origami Society, Origami USA, the Sculpture Network in Europe and the Paper Artist’s Collective Worldwide. His work will be showcased at the Arte Laguna in Venice, CODA Museum in Apeldoorn, Netherlands and at the Seoul Architecture Biennale in Korea in 2021.

With “Oritecture”, Mitra shares a unique vision of a universe forming and dissolving from acts of folding. Mitra says: “The ancient art of Origami is not only a child’s craft but a cutting-edge tool/technique that is being deployed by robotic engineers, space scientists, biotech researchers, mathematicians, computation experts, botanists, architects and artists to create solutions for the real world in the 21st Century.”

Mitra passionately believes in the two maxims – “Geometry aims at the eternal” (Plato), and “The universe is mathematics” (Max Tegmark).

Ankon Mitra, often referred to as the torchbearer for Origami in India, is also a TEDx speaker and a warrior for “making connections across disciplines”.