Ecuador – Fr Ambrosio Sainaghi, SDB, dies after a life dedicated to the missions 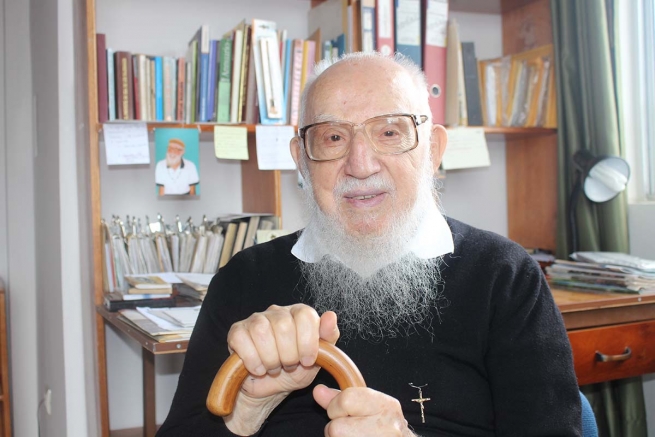 (ANS - Macas) - Fr Ambrosio Sainaghi, SDB, an Italian Salesian missionary, died on Wednesday 2 September, at the age of 96, in the community of Macas, where he had lived since 2016. There he spent his last years of life, accompanied by his Salesian confreres with whom he shared the same passion: the missionary vocation.

His interest in religious life and missions was born in an oratory in Milan. There he met a Salesian missionary from China who became his catechism teacher. After a few months, he had to return to China and then asked Ambrosio to replace him in the position of catechist. The young Ambrosio accepted the proposal and then made the decision to start the aspirantate.

During the novitiate, he asked to leave as a missionary and was assigned to Latin America. Ecuador awaited him, a country of which he knew little, and he arrived there on November 10, 1950.

He studied Theology in Colombia, in Bogotá and, after four years, he returned to Ecuador, in Gualaquiza for his priestly ordination, which took place on November 5, 1961.

Bomboiza, a Salesian community located in the jungle, which serves the Shuar indigenous population, is a community that today remembers Fr Sainaghi with much affection, given that he was one of its founders. His job was that of an itinerant missionary: he brought the joy of the Gospel to the area's communities and met and talked with young people.

His work in Sucúa was also noteworthy, where he worked hard so that the Shuar could obtain identity cards and become citizens. At the time, non-indigenous people showed great contempt towards indigenous people, because they did not have an identity card, but Fr Sainaghi fought to see their rights respected and accompanied them at all times.

He spent a good part of his missionary life, a good 30 years, in Cuenca. The work functioned as a place of welcome for Salesians who came from the eastern areas for medical treatment, to carry out their studies or to purchase products necessary for their work in the communities.

Here, he had the opportunity to help street children who survived by working as shoeshines or selling newspapers. On weekends he gathered them and organized football matches with them, gave them food, clothes and talked to them about God's love, just as Don Bosco had done before him with the children who came to Turin from different parts of Italy.

Fr Sainaghi was a man and a Salesian who fulfilled his vocation with satisfaction. As he said in an interview in 2016: “I do not regret being a Salesian: I am happy and content, happy to have given my life for the mission and, if God permits, to continue working according to my missionary vocation, which I was lucky enough to exercise all my life.”