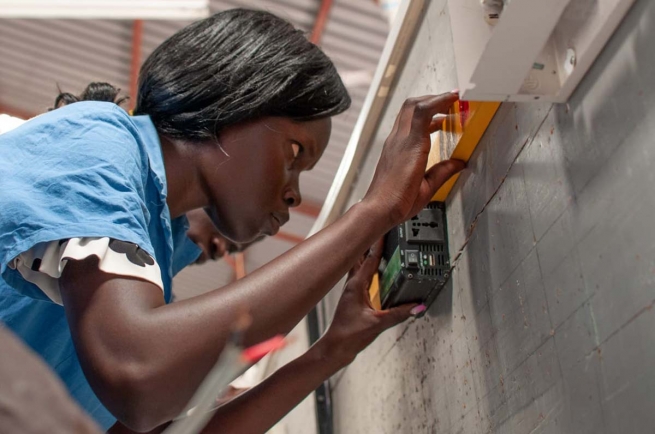 (ANS - Juba) - The young women who attend the Don Bosco Vocational Training Center in Juba, South Sudan, have received scholarships that will contribute to their formation and that will allow them to continue their studies, thanks to donor funding of “Salesian Missions”, the Salesian Mission Office of New Rochelle, USA.

These scholarships, which focus primarily on female students, cover 50% of the tuition, making it much easier for girls to get an education. Ayany Pamela, one of the students at the Vocational Training Center, said: “This program gave me the courage to go back to school. I had not been able to continue my studies due to financial problems, but then I learned that women were being given this opportunity. This has greatly affected my personal life, allowing me to acquire knowledge and skills. Without this program, I cannot imagine how I would have continued my education or found a good job.”

John Garry, a teacher at the Juba Vocational Training Center, noted that these scholarships are transforming the lives of many young women. The program is also encouraging families, who are usually reluctant to send their daughters to school.

In South Sudan, due to a lack of financial support, many families decide to marry girls early. The aim of the program is to reduce the incidence of early marriage and to enable young women to gain education and independence in the workplace.

Professor Garry added: “I see a lot of improvements since girls get a better education. There are many girls who join technical fields such as electronics, auto-mechanics and information technology. Without a doubt, very soon our girls will compete with men in the development of the country in these fields. Don Bosco and our benefactors have given hope to many poor families.”

South Sudan gained independence in 2011 but faced a civil war, which began in December 2013, and led to a humanitarian crisis even before the coronavirus pandemic. Responding to civil war is nothing new for Salesian missionaries, who are dedicated to numerous projects throughout the country.

South Sudan is a mainly rural country, with 80% of the population having a daily income estimated to be below one dollar, according to the World Bank.