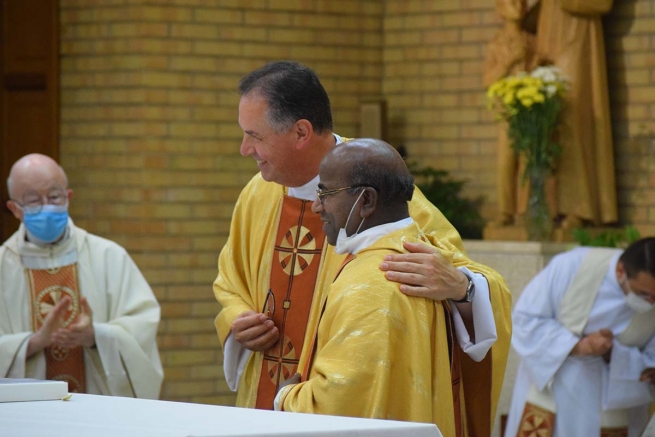 (ANS - Rome) - Last Saturday, 5 September, during a Eucharistic celebration presided over by Fr Ángel Fernández Artime, Rector Major of the Salesians and Grand Chancellor of the Salesian Pontifical University (UPS), Fr Maria Arokiam Kanaga was appointed as the new Superior of the Vice Province "Maria Sede della Sapienza” of the UPS.

The new Visitor, a past pupil of the UPS where he studied Theology and obtained a Doctorate in Philosophy, took up the post for the 2020-2026 term.

Fr Maria Arokiam Kanaga Kanaga was born on 4 October 1956 in Varadarajanpet, Trichy, India. He entered the novitiate of Yercaud and took his first religious vows on May 24, 1976, and his perpetual vows on the same day in 1982, in Madras. He was ordained priest in Rome in 1986.

Director since 1992 of the "Don Bosco" of Tirupattur, of the Theological Institute of Madras-Poonamallee and of Yercaud, he studied Theology and obtained a Doctorate in Philosophy at the Salesian Pontifical University in Rome.

He participated in General Chapters 24, 25 and 26 and was a member of the Pre-Chapter Commission of the GC27.

For the occasion, Fr Mauro Mantovani, Rector Magnificus of UPS, expressed his good wishes to Fr Kanaga, wishing him "a fruitful work at the service of the common mission", and at the same time thanked Fr Eugenio Riva, Kanaga's predecessor in the position as UPS Visitor, "for the great work done in recent years."