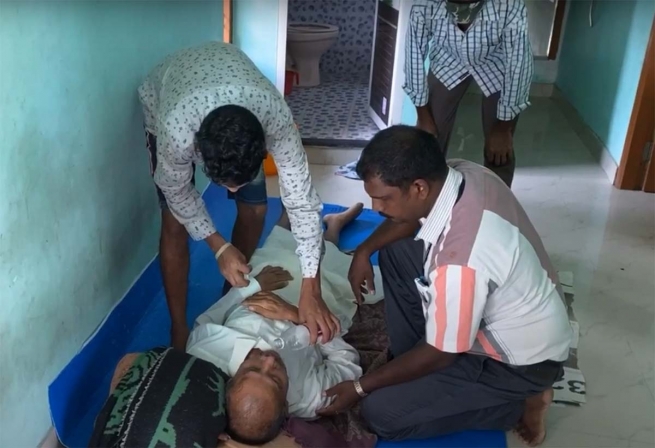 (ANS - Trivandrum) - Krishna Khakhlari, 42, is from the State of Assam and worked with informal jobs in Trivandrum, in the State of Kerala, since 2015. He has a grandmother, a wife and three daughters at home to feed, to whom he always sent all the money he earned. For him, the well-being of his family has always been a priority. But a few months ago, on 11 June 2020, his life completely changed. On his bicycle ride to work, he had a serious accident and suffered a serious head injury.

Doctors from the Trivandrum Medical College, where he was treated for 10 days, confirmed that the wound had paralyzed him from the waist down and that he would never move on his own. For Krishna, this meant that he could no longer take care of his family, who furthermore were 3,500 km away from the site of the accident.

Mr. Abhilash, the Assistant Labor Officer, was familiar with the work of the “KISMAT” project for migrant workers and put Krishna in contact with the volunteers.

KISMAT is the name of a project of BREADS, the Planning and Development Office of the Salesian Province of Bangalore. This project serves migrants from other states of India who work in the state of Kerala. That is, it serves people like Krishna: people who work occasionally and who earn only in the days of actual work.

When the Indian government imposed the lockdown, Krishna's only thought was to get home as soon as possible. KISMAT members, after consulting with doctors and collecting reports, obtained a certificate of fitness to travel. The doctors suggested transporting him by plane, but the hypothesis was rejected due to the many difficulties imposed by the pandemic.

Having abandoned the idea of ​​flying, KISMAT staff held further meetings with the district labor official, who agreed to have Krishna taken to his home in an ambulance; the government would pay the costs. First, an ambulance was found willing to travel 7,000 km (to the state of Assam and back).

Accompanied by three assistants, Krishna was finally able to make his journey; and after the lengthy journey, lasting six days, he was able to reunite with his grandmother, wife and three children.

The KISMAT team wanted to thank everyone who was involved in this journey and recalled that KISMAT means "destiny": a destiny, that of Krishna, which they are happy to have changed for the better.