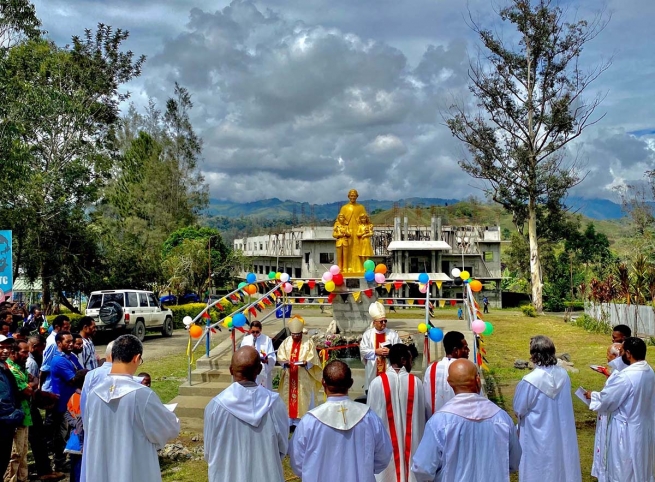 (ANS – Kumgi) – 25 years ago, upon the invitation of Bishop William Kurtz, SVD, the pioneer Salesian missionaries came to the Diocese of Kundiawa, in Simbu Province to start their mission on behalf of youth. The pioneer Salesian missionaries were the late Br Ramon de la Cruz (Filipino), the late Fr Joseph Savina (Italian), and Fr David Buenaventura (Filipino). In 1996, Don Bosco Kumgi welcomed its first intake of woodworking students. The garage of the Salesian Residence at the time served as the workshop.

In 1997, Fr Joseph Savina was installed as the first Rector of Don Bosco Kumgi and in the same year, the school was named “Don Bosco Institute of Technology.” By 2002, the school had been more popularly known as “Don Bosco Tech – Kumgi” (DBTK). In 2015, Don Bosco Tech - Kumgi (DBTK) was raised to the level of a college and assumed the name “Don Bosco Simbu Technical College” (DBSTC). This year, at DBSTC, there are more than 500 students, 34 teachers and 5 ancillary staff.

The theme for the Silver Jubilee is: “DB KUMGI: High 5 @ 25.” The events aim at showing gratitude for the past, celebrating the present, and envisioning the future.

High 5 is a gesture of greeting and signifies relationship, friendship and celebration. 5 stands for the 5 elements of the logo or seal of DBSTC: the laurel leaves for education and success, the gear for technical training and skills, the cross shows that DBSTC is a Catholic mission school, the Bird of Paradise stands for Papua New Guinea, and the motto: “Training for Life.” 5 also stands for the 5 aims of DBSTC as indicated in the school’s handbook. “High 5 @ 25” invites and also challenges the community of DBSTC to move forward and continue fulfilling the dream of Don Bosco on behalf of  young people.

On Monday (7 Sept), there was the Road Show at Kundiawa town. The school truck and school bus were decorated. The statue of Saint John Bosco was mounted on a stand and displayed on the truck along with some students in their traditional "bilas" costumes representing the various provinces of PNG.

On Tuesday (8 Sept), there was the Talent Show and the Battle of the Bands in DBSTC's gym.

On Wednesday (9 Sept), there was the Open House Exhibit. Outsiders and students from other schools came to see the technical workshops and the projects of the Bosconians. In the afternoon, the Musical Play entitled "Man With A Dream", on the life of Saint John Bosco, premiered in the DBSTC gym. It was directed by Fr Clifford Morais. Selected Bosconians took part either as members of the cast or the crew. In the afternoon, some community leaders of the tribes nearby came to hand over their gifts to the Salesian Community: flowers, fruits, vegetables, 2 live chickens, 1 live pig and cash. Three community leaders spoke on behalf of their tribes. Fr Edwin Genovia (Principal) and Fr Angel Sanchez (Rector) also addressed them afterwards.

On Thursday (10 Sept), there was the Silver Jubilee Thanksgiving Mass presided by the Bishop of Goroka, Bishop Dariusz Kaluza MSF. In his homily, he indicated three key words that summarise the readings and the celebration: Hope. Joy. Greatness. The occasion was also graced by the presence of the former bishop of Kundiawa, currently the Archbishop of Madang, and the President of the Catholic Bishops Conference of PNG-SI, Archbishop Anton Bal. Several priests came to concelebrate in the Thanksgiving Mass. Some religious sisters working in Kundiawa Diocese also participated. Archbishop Anton Bal, Fr Ryszard Wajda SVD (Diocesan Administrator of Kundiawa), Fr Dominic Kachira SDB (Vice Provincial of the Salesians in PNG-SI), and Fr Angel Sanchez SDB (Rector of DBSTC) delivered their speeches. Some members of the Governing Council of DBSTC were also present. Fr Dominic, in the name of the confreres of PGS Vice Province, handed a gift to the Salesian Community of Kumgi: a portrait of the Good Shepherd as a reminder of the mission of the Salesians to be signs and bearers of the love of the Good Shepherd.

After Mass, Archbishop Anton Bal blessed the monument of St John Bosco with St Dominic Savio and Blessed Laura Vicuña, as well as the 8 new kiosks or ‘haus win’ in the school grounds. Before noon, the Musical "Man With A Dream" was again staged for the guests.

On Friday (11 Sept), the Cultural Show was held. A total of 18 groups participated and performed to showcase the colourful and diverse culture of Papua New Guinea. Thousands came to watch this most awaited show. Fr Dominic Kachira SDB and Br Reto Wanner SDB (PGS Provincial Secretary) and Mr. Nick Bange (member of the Governing Council of DBSTC) were the judges for the cultural show.

On Sunday (12 Sept), there was another Thanksgiving Mass (Misa Bilong Tok Tenkyu) but this time with the Catholic faithful from the surrounding communities. The Diocesan Administrator of Kundiawa Diocese, Fr Ryszard Wajda SVD, presided over the Mass. In his message, Fr Angel Sanchez SDB (Rector) briefly narrated the history, origins and development of the Salesian work in Kumgi. He reminded the assembly of the pioneer Salesian missionaries and those who helped them find the land (more than 18 hectares in size) and put up the school. He also called out the names of the past rectors of Kumgi. There have been 8 since the time of Fr Joseph Savina. Towards noon, "Man With a Dream" was staged for the third time. In the afternoon, there was "bung kaikai" (shared meal) among the 7 small Catholic communities surrounding DBSTC.

The first Rector of Don Bosco in Kumgi is named "Joseph." The patron of the Salesian Community is "Saint Joseph." The oldest parish in the Diocese of Kundiawa is Saint Joseph Parish in Mingende where the Salesians also help with Sunday Masses. Surely St Joseph has been interceding for Don Bosco Kumgi. His name is even mentioned in the Vision-Mission Statement of DBSTC recited in the assembly on Mondays and Fridays.

For who can best help and assist the Salesians in their ministry and apostolate of “training for life” than the Guardian of the Redeemer himself, who, with Mama Mary, trained the boy Jesus!