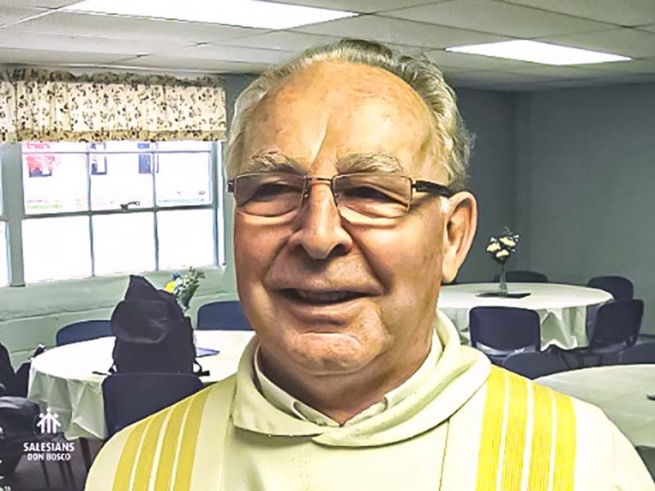 (ANS – Sherbrooke) – Fr. Romeo Trottier, SDB, passed serenely from Sherbrooke, QC, into eternity at 4:20 a.m. on Sunday, September 13. In faith, we trust that he didn’t stop at the Pearly Gates but continued until he reached the Salesian Garden and was welcomed by Don Bosco, the Madonna, and the pantheon of holy Salesians.

Fr. Romeo was 83 years old, was professed as a Salesian for 65 years, and was a priest for 54½ years. He’d been suffering from leukemia for about two years, continuing his ministry of Canadian Salesian communications as best he could. He was taken to University Sherbrooke Hospital (CHUS) on Saturday, September 5 with breathing difficulty, and on Wednesday, September 9 was taken to Fleurimont Hospital to receive palliative care.

Fr. Romeo was one of the great men of the one-time Canadian delegation and Canadian vice province, where he passed his entire Salesian life except for his studies in New Jersey, New York, and Italy. “He was an expert in Salesian spirituality, the key person in the creation of the Canadian vice province in 1988, and a model of friendly presence to the young even in his 80s,” writes Fr. Rich Authier, former superior of the vice province.

Fr. Romeo succeeded Fr. Ron Quenneville as provincial delegate for Canada in 1976 and served for 12 years until the erection of the vice province. For many years (starting around 1990), he edited Canadian Salesian news in a couple of formats, and after the untimely death of Fr. Paul Cossette in 2013, he also took over Carrefour Salésien, the Canadian Salesian Bulletin.

Fr. Romeo came from a small town called Proulxville, near Three Rivers, Que., where he was born to Donat and Aline Carpentier Trottier on the feast of the Assumption in 1937 and baptized the next day at the parish church of St.-Severin. The town may be small, but the Trottiers were a large family: Fr. Romeo had six brothers and six sisters, and he landed almost exactly in the middle of the procession, the sixth-born.

Romeo attended the local elementary school from 1943 to 1950. Like many of our Canadian confreres, he owes his vocation (after God and family) to the recruiting efforts of the legendary Fr. Pierre Decarie. Fr. Decarie came to Romeo’s school in the spring of 1950 to speak to the youngsters about Don Bosco and the Salesians, and he also mentioned the seminary in Newton, NJ, and the summer camp in Ellenville, NY.

Romeo had already taken the entrance exam for the Three Rivers diocesan minor seminary, but he showed an openness to the Salesians. Mr. and Mrs. Trottier consented for Romeo to go to Newton. There were already many Canadians studying there, who came to number about 20, including youngsters who headed south with him.

Romeo had never been farther away from home than Montreal. But in July 1950 he set out for Ellenville, and in the fall to Don Bosco Seminary. He liked his first-year experience, even though he had to learn English. The Canadian aspirants attended separate classes until they were proficient enough in English gradually to be integrated into the regular classes. Romeo particularly liked his classes taught by Son of Mary Dominic DeBlase, Bro. Peter Granzotto, and Bro. Vince Zuliani.

In 1951 the aspirantate was transferred to Haverstraw, NY, as Don Bosco Juniorate under the directorship of Fr. Joseph Caselli, who was a very understanding superior.

Desiring “to be a good Salesian and worker in the Lord’s vineyard,” Romeo entered St. Joseph’s Novitiate in Newton on September 7, 1954. He was part of a very distinguished novitiate class, Fr. Aloysius Bianchi’s first as master of novices. They lived in the “gray house,” the so-called Horton mansion. Some of the others in the class were Tony Ambrogio, John Blanco, Francis Bracchi, Bob Falk, Barney Hagus, George Hanna, Jean-Paul Lebel, Orlando Molina, Gerard Richard, and Alfred Rinaldi. They made their first profession on September 8, 1955.

When it was time to study theology, Bro. Romeo had the luxury of a fine cruise across the Atlantic—at the time that was less expensive than flying. While some of the Canadian theologians went to Lyons or Castellamare, Bro. Romeo was the only one who went to Rome. He took the “propedeutic” or preparatory year of non-theological studies. The purpose of this program eluded him then and still did till the end of his life.

In 1962 he moved up to Turin and enrolled at the PAS—the famous “Crocetta” theologate (taking its name from the neighborhood). Unfortunately, he arrived too late to have been taught by the Ven. Joseph Quadrio, but he remembers that the seminarians prayed at the holy priest’s bedside the night before he died, October 23, 1963. He was privileged to take courses with some of the Congregation’s most distinguished professors, such as Fr. Domenico Bertetto, Fr. Agustino Favale, Fr. Antonio Javierre (the future cardinal), Fr. Pietro Brocardo, and Fr. Eugenio Valentini.

In 1965 the main campus of the PAS was shifted to its new location in Rome, and Bro. Romeo was in the first “senior” class there. That gave him an opportunity to witness the last session of Vatican II and take part in the closing Mass, December 7, 1965. He vividly remembered the Council’s closing with its many speeches on December 8.

Ordination to the priesthood came at the hands of the cardinal vicar, Luigi Traglia, on March 5, 1966, at St. John Bosco Church in Cinecittà. His mother and one sister were able to come and spend a few days in Rome. He earned an STL from what had become the UPS (instead of PAS).

Being present for the closing days of Vatican II was a special experience, and most special was a post-ordination audience with Pope Paul VI with the class’s parents, each newly ordained greeting the Pope. He told the newly ordained, “Wherever you go, be priests of the Council”—which, obviously, stuck with Fr. Romeo.

Fr. Romeo’s first priestly assignment was to Seminaire Salésien in Sherbrooke, Que., where he stayed for 15 years (1966-1981), teaching Latin, religion, English, and art history at various times, and also at various times responsible for student life and discipline. At the time the school enrolled about 80 pupils, all boarders. The following year (1967), it opened to local day students. In these years he earned a Bachelor’s degree in education from Quebec City’s Laval University (1972) and a Master’s degree in pastoral education at the University of Sherbrooke (1973).

In 1975 he was appointed director of the community and school, serving two terms (till 1981). Simultaneously, from 1976 he was superior of the Canadian delegation, till 1988. This responsibility entailed visiting the houses, overseeing the delegation’s finances, and working in collaboration with the provincial in New Rochelle. He collaborated with three provincials—Frs. Sam Isgro, Dominic DeBlase, and Richard McCormick—but enjoyed most working with Fr. Dominic, whom he found particularly affable.

Then he collaborated for nine years as vice provincial (1988-1994, 2006-2009) with Fr. Richard Authier when the Canadian delegation was elevated to a vice province (1988-2009). Around 1988 he was named Salesian provincial delegate for the Canadian Cooperators, serving them officially until 2018.

His influence with the Cooperators was tremendous. According to Rosa D’Addario, their former coordinator: “In all things Salesian [he was] definitely the authority, most informed. With regard to others, encouraging, loving, attentive, a caring listener with a delightful sense of humor, warm, enthusiastic, friendly, approachable, wise, and compassionate; always made you feel welcome and completely at ease. He always participated in regional encounters.” She adds, “Fr. Romeo was a great person, and I will really miss him!”

When his term as director in Sherbrooke ended, in 1981 he moved to Ste. Claire Parish in Montreal as an assistant. When Fr. Jean-Paul Lebel volunteered for the missions and left for Rwanda in 1983, Fr. Romeo succeeded him as pastor and director, serving till 1995. In 1984 he was one of the province’s delegates to GC22.

A short stint at Maria Ausiliatrice Parish in Riviere-des-Prairies, Montreal, followed (1995-1996) before he was sent back to Sherbrooke as director for two more terms (1996-2002). He remained thenceforth in Sherbrooke, doing multiple jobs at times, including community treasurer, pastoral ministry, Cooperators, communications, etc.

Fr. Romeo listed parish work, his years of theological study, and student life in Jacquet River as his most enjoyable experiences as a Salesian. He retained happy memories particularly of Fr. Ted Ciampi and Fr. Paul Avallone, two of the founders of Salesian work north of the border, and of Fr. Joe Caselli and Fr. Maurice Petit.