RMG – “Animating and Governing the Community - The Ministry of the Salesian Rector”: Interview with Fr Martoglio and Fr Coelho on the 1st part of the document 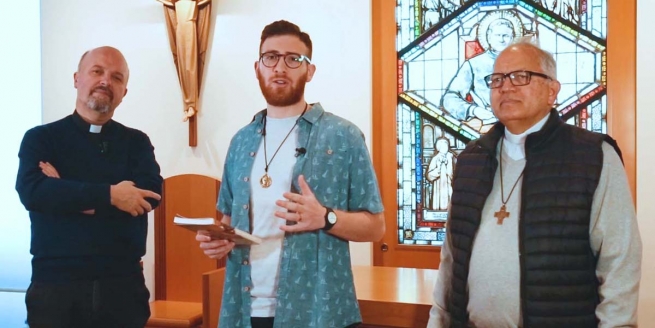 (ANS – Rome) – The video presentation of the first part of Animating and Governing the Community: The Ministry of the Salesian Rector is available on YouTube (links below), along with other animation aids for the communities, which is going to be disseminated via email to all Provinces and Rectors. The video, originally in Italian, has been dubbed in English, Spanish, French and Portuguese.

The video consists of an interview with Fr Stefano Martoglio, Vicar of the Rector Major, and Fr Ivo Coelho, General Councillor for Formation and deals with “The Salesian consecrated identity,” which is the first of the three parts of the document that was released during General Chapter 28.

This part sees our consecration from the point of view of our mission, which is not so much “working for young people” but “being signs and bearers of God’s love to them.” It talks about how we Salesians share in this mission precisely as consecrated people – Brothers and Priests – among the many others who partake in the same mission. It highlights the Rector’s role as guardian of Salesian identity rather than manager of the Work and invites him to exercise authority as a brother among brothers: “Strive to make yourself loved.”

The video will be accompanied by a PowerPoint /PDF presentation and a handout, aimed to facilitate the personal study and the community sharing, ending up with four questions touching the main points emerged from the video interview. For those interested  – individual and communities - there is digital open forum on the same questions, where opinions can be shared with confreres of other Regions and provinces - the same link will be available in the handout.

Communities are invited to make use of these tools as a help for reading and digesting the first part of Animating and Governing the Community: The Ministry of the Salesian Rector over the next three months, from October to December 2020.

Formation communities, instead, have been invited to study Young Salesians and Accompaniment: Orientations and Guidelines with the help of the “video-seeds” that will be disseminated in monthly basis, from September 2020 – already sent – to June 2021.