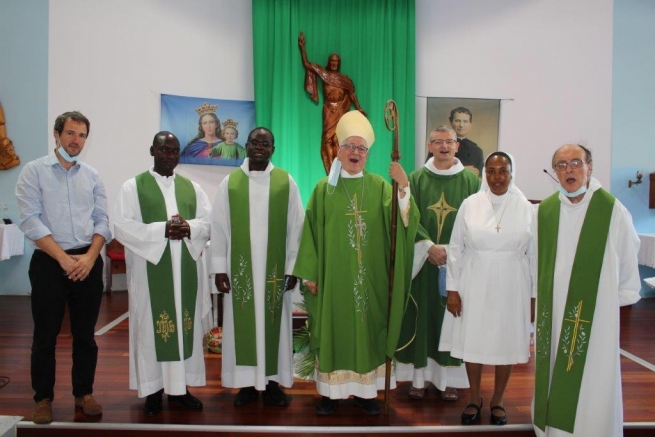 (ANS - Les Abymes) - Last Sunday, 20 September, the Salesian priest Fr Christian Tshala, SDB, took possession of his new parish. What makes this event special, in itself similar to many others, is the fact that it is a "first Salesian presence" in Guadeloupe, an overseas region of the French Republic, located in the middle of the Antilles, in the Caribbean Sea.

Fr Tshala, a Salesian missionary born in the Democratic Republic of Congo, but belonging to the "France-Belgium South" Province (FRB), reached the island of Guadeloupe on 31 August, accompanied by Fr Pierre Gernez, who became parish vicar, and by lay collaborator in the Salesian mission Arthur Massiet du Biest, of the association “Le Valdocco”.

Guadeloupe clearly represents a privileged mission field for the spiritual Sons of Don Bosco: it is the most disadvantaged Department in the French Republic and has a large youth population - with a third of the population under the age of 20, of which about 20% lives below the poverty line. Furthermore, 20% of young Guadeloupans leave school without qualifications and the absenteeism rate is the highest of all the French departments; not to mention the unemployment rate among young people between 15 and 29, equal to 43.7%.

Sensitive to the worrying situation of most of the young people, Msgr. Jean-Yves Riocreux, bishop of Basse Terre, the capital of Guadeloupe, invited the Salesians to settle in his diocese.

The arrival of the Salesians in Basse Terre foresees a double involvement:

The animation of a parish. Archbishop Riocreux has entrusted the parish of "San Luca", in the city of Les Abymes, to the Salesians. It is a municipality of 58,500 inhabitants that includes several working-class and poor areas and a very important school complex (with schools, colleges, general, technological and vocational).

The Christian community is very lively and youth ministry is very developed, with several hundred children attending the Catechism, sees the presence of French Scouts, school chaplaincies, a youth orchestra, a large group of altar boys.

A socio-educational presence among young people in difficulty. The idea is to create, with the involvement of the inhabitants and local collaborators, a local association according to the model of the "Le Valdocco" association and which is part of the "Don Bosco Action Social" network.

Arthur Massiet du Biest, sent by the association for this purpose, will accompany the development of this socio-educational project, based on three axes:

- educational and scholastic support, as well as help with orientation and vocational integration;