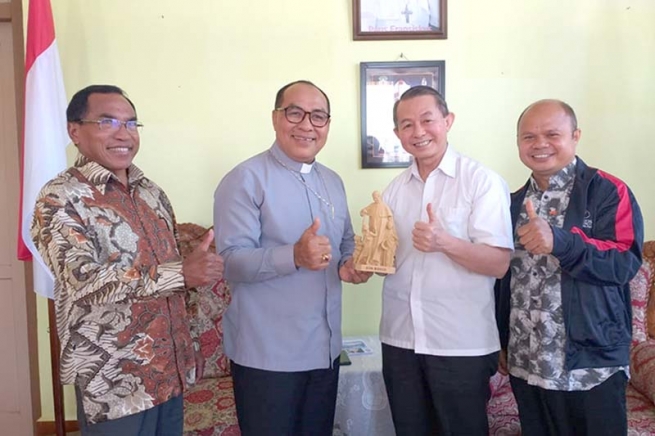 (ANS – Ruteng) – The first goal of the Salesians is to serve the Church and young people. So, the Salesians are happy to accept whatever work could be given to them, because they are serving the Catholic community with the charism of Don Bosco by evangelizing poor young people and encouraging vocations. For this reason, after the first exploratory visit last October 2019 to the three dioceses of Flores Island (Ruteng, Maumere and Ende), on 13-17 September the “St. Louis Versiglia” (INA) Vice-province Superior, Fr Andrew Wong, accompanied by Br. Bernardinus Mei, paid a visit to the Ruteng diocese, emerging as the possible new presence of the Salesians of Indonesia in this mostly Christian island located in the Eastern part of Indonesia (East Nusa Tenggara).

On 14 September both of them traveled from Jakarta to Ruteng - the capital of Manggarai district, Flores. In Ruteng they met the recently ordained Bishop, Siprianus Hormat, before evening prayer in his residence.

On September 15 in the morning, there was an official meeting with the bishop, who opened the meeting by greeting both Salesians and presented his large diocese and its history, which goes back to the early years of the 20th century. The Catholic faith has been planted there since the first baptism on 17 May 1912 in Jengkalang, Reo (north of Manggarai district), then with the establishment of mission schools in Labuan Bajo, Reo, and Ruteng. On 23 September 1920, a permanent mission in Ruteng began, slowly developed into the Ruteng Apostolic Vicariate, and officially became the Ruteng Diocese on 3 January 1961, with its first bishop Wilhelmus Van Beckkum, SVD.

The current bishop, Bishop Siprianus Hormat, is the fifth bishop of Ruteng and the fourth son of Manggarai. The diocese has one Pastoral Centre, six Educational works, one minor seminary, two intermediate Seminaries, three postulates or aspirants, three novitiates, two charitable social works, and three health works. Ruteng diocese has 89.7% Catholics - 851,609 of a population of 950,000, with 176 diocesan priests and 116 religious priests (SVD, OFM, SMM, SC, OSM, CRS and SDV), 184 male religious (CSA, SVD, OFM and SMM) and 526 religious sisters, divided into 86 parishes and 4 deaneries: Ruteng, Labuan Bajo, Borong and Reo. Most of the religious houses are concentrated in the city of Ruteng – 54 of them.

In turn, Fr Wong continued the exchange with gratitude for his welcome and hospitality. The INA Provincial said that since he was appointed as the Salesian Superior of Indonesia, he observed that many Salesians came from eastern Indonesia and particularly from Flores. Then he began to consult different diocesan priests, bishops and also the Papal Nuncio in Jakarta. There was a converging suggestion to open ministries in Flores. All of those consulted indicated Ruteng diocese as a place to be and to serve for the Salesians.

In the following discussion in which also the Vicar General Fr Alfons Segar and Fr Max Haber were involved, some possible kinds of apostolic work were spoken of that might be fitting for the Salesian charism in Ruteng diocese: parish, youth centre, TVET (non-formal vocation training centre), centre of Marian devotion (there is a strong Marian devotion in Flores), looking after school dropouts.

On 16 September, together with the bishop, the two visitors went to Borong Vicariate, East Manggarai, and then they visited the Minor Seminary of Pius XII in Kisol: 400 students of junior and senior high school. The visitors were introduced to classrooms, dormitories, chapel, and libraries. There were two points that struck them: the young seminarians are well-educated from a spiritual, intellectual and human perspective; also the well-prepared (MA degree in education in many fields of languages, history, counselling or guidance) formators both priests and practical training brothers or clerics from the diocese, as well as from several religious congregations. So, the candidates could see a variety of different spiritualities during their stay. In this way, the graduates of Kisol minor seminary are much appreciated in the local Church.

On 17 September, Fr Wong and Br Mei traveled back to Labuan Bajo and also had time to look at the Minor St. John Paul II Seminary. On 18 September 2020, the second exploratory trip to Flores ended and both visitors returned to Jakarta by Batik Air.

“We ask your prayers during this delicate period of discernment, as to when, where and how to start our first Salesian presence on Flores island,” Br Mei concludes.