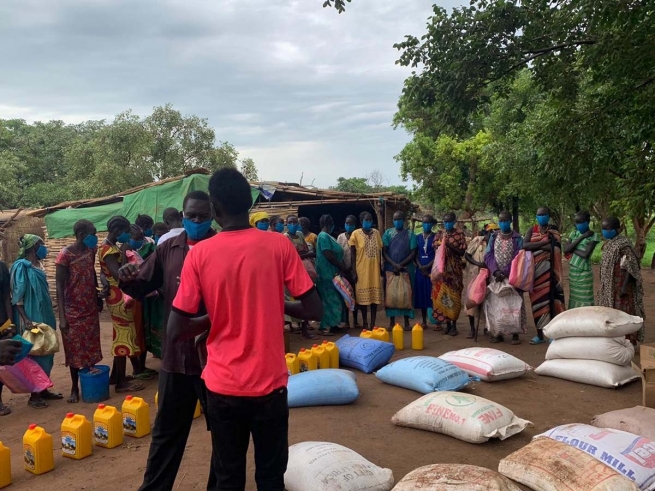 (ANS - Tonj) - The Salesian organization "Don Bosco Mission" of Tonj, in these months marked by the Covid-19 pandemic, has been at the forefront to improve the standard of living of the South Sudanese population. To do so, it has received support from the Salesian Mission Office of Madrid via the network of “Solidarity Vs COVID-19”.

The objective of the project supported by the Madrid Mission Office was to offer support to the internally displaced people of Tonj and the western state of Bahr-el-Ghazal, who find themselves in this situation due to violent border conflicts. These people were left homeless and forced to take refuge in the adjacent forests without food, water, shelter, sanitation, medicine.

After being contacted and duly registered, the displaced families received a donation of basic necessities. More than 3,500 internally displaced people have benefited from these emergency items. The whole population expressed happiness and great appreciation for the commitment of the Salesian missionaries who have never stopped providing their support to vulnerable communities and those most affected by conflicts.

In addition to the distribution of primary goods and medicines, radio programs were also broadcast in recent months; the preventive measures to be taken to prevent coronavirus infection were described.

As explained in detail in a report written by Fr Joseph James Nakholi, the main areas of intervention were the State of Tonj (and the capital of the same name), and that of Bahr-el-Ghazal, especially in the areas of Bap-Chok, Kapara, Dakum, Kuelcok and in the Checkpoint area.

“The health standards of families, and especially of children, have improved thanks to the supply of medicines,” continues Fr Nakholi in the report. “The population has also recovered emotionally and psychologically after the intervention of the Salesians.”

Similar actions, aimed at IDPs, were also extended to the village of Lepers, thanks to the intervention of the Salesian Mission Office of South Korea and the "John Lee Memorial Foundation", a foundation erected in memory of the late Korean Salesian missionary Fr John Lee, SDB, in order to help the mission in South Sudan.