Slovenia – "A reflection of the East". The story of Servant of God Fr Andrea Majcen, SDB, in an illustrated book 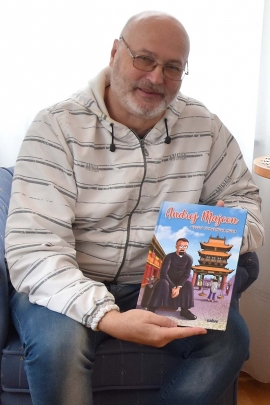 (ANS - Ljubljana) - On the occasion of the Dies Natalis of the Servant of God Fr Andrea Majcen (Maribor-Slovenia, 30 September 1904 - Ljubljana, 30 September 1999), the Salesian Province "Saints Cyril and Methodius" of Slovenia and the publishing house "Salve" have published an illustrated book for children that tells the "missionary adventures" of Fr Majcen.

Fr Andrea Majcen, a Salesian and heroic missionary, is considered the "patriarch of the Salesians" of Vietnam, a country he reached in 1952 after being expelled from China. He remained in Vietnam until the advent of the communist regime in 1976, when he returned to Slovenia, becoming a missionary animator, spiritual director and confessor until the end of his life with forty-four years of missionary apostolate in China and Vietnam and 20 years of missionary animation in Slovenia. The reflections and meditations, collected in his diaries (more than 6,000 handwritten pages), express a profound Christian and religious life and a personal commitment to spiritual growth. In his long and fruitful life, Fr Majcen fulfilled the mission of being in the Church a sign and bearer of God's love, drawing from the very Heart of Christ that pastoral charity marked by great apostolic ardor and a predilection for young people.

Today his missionary, religious and human history is collected in an educational comic book, created by illustrator Juan Juvančič, a Salesian past pupil of the Don Bosco Institute in Buenos Aires, thanks to the collaboration of the vice-postulator of his cause, Fr Alojzij Slavko Snoj, and of the Delegate for Social Communication Marko Suhoveršnik.

The book's illustrator, Juan Juvančič, was born in Argentina to Slovenian parents. He attended Salesian schools and started a family and lived for many years working in Argentina. In 2008 he moved to his parents' land where, in addition to other jobs, he collaborates with the Salesians.

The artist learned about the figure of Fr Majcen only a year ago, on the occasion of the closure of the diocesan process of his cause, but was immediately fascinated by him. He studied his life and via illustrations he tried to narrate significant and amusing events of his missionary actions. In doing so, he used bright colors and action scenes, so that the message that the Servant of God lived and transmitted the Word of God in China and Vietnam was clearly expressed in just a few words.

The comic is also accompanied by a short animated video in various languages, which lists the most important dates in the life of Fr Majcen and summarizes the human, spiritual and apostolic life of the Servant of God: