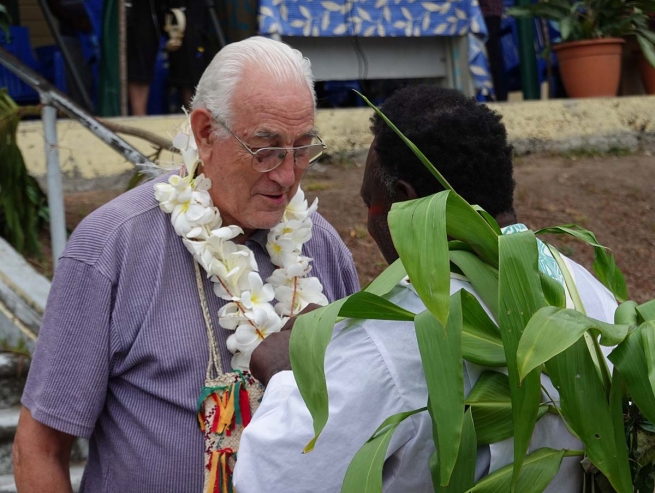 (ANS – Rabaul) – Archbishop Francesco Panfilo, SDB, was given an emotional farewell by the people of the three deaneries of the Archdiocese of Rabaul. The celebration was held at Vunapope on 28 September 2020.

Over the past few weeks, the people have expressed their gratitude and thanks to their shepherd Archbishop Panfilo. During his years as archbishop, he has travelled the length and breadth of the diocese, waded through fast-flowing streams, climbed steep mountains and sailed rough waters to reach his flock in the remote parts of the diocese. He was with his people to celebrate the sacraments with them, listen to their struggles and respond to their pains both spiritual and material. Over the last few weeks, he celebrated the Sacrament of Confirmation in several parishes and ordained men to the priesthood.

Amidst expressions of gratitude at Vunapope were tears of appreciation for the much-loved shepherd for the past ten years. “Our thanks are not only in words, but it is expressed in our deeds and through the expression of our gifts”, were constant refrains as shell money and customary gifts of pigs and food were presented to the archbishop.

Archbishop Panfilo took as his theme: Duc in altum – an ‘invitation to remember the past with gratitude, live the present with enthusiasm and look forward to the future with confidence’ (Novo Millennio Ineunte, 1).

“Celebrating the 50th Anniversary of the establishment of the Archdiocese of Rabaul was a time for all the laity, consecrated persons, and clergy, to assess our fervor and find fresh enthusiasm for our spiritual and pastoral responsibilities,” said Archbishop Panfilo. He encouraged his flock to strive for Holiness, give importance to Prayer, to the Sunday Eucharist and to listen and proclaim the Word of God.

Vocations were his priority as he guided and supported several to the priesthood or religious life. On 27 September he ordained three priests – Fr Vincent Ngamanga, Fr Henry Matlavn and Fr Joseph Maglsos and two deacons – Dn Patrick Taroro and Dn Clarence Hamut. Fr Vincent Ngamanga is the second priest from his village in Pomio. He encouraged them to listen to their people, be humble, have a strong prayer life and be devoted to the Blessed Mother. He was emotionally moved as he celebrated his last Ordination as the Archbishop of Rabaul.

He reminded the people to follow the Pastoral Plan of the Archdiocese and put into practice the motto of the Archdiocese: “Ut Unum Sint”.  “That they may all be one, as you, Father, are in me and I in you” (Jn 17:22-23).

An issue dear to his heart was that of Land. In his last Pastoral Letter dated 8 September, he appealed to everyone to put personal interests aside and think of the common good, reminding them to leave behind the gifts received in good shape. “It should bring people together, instead it is tearing people apart because of greed and pride. The Church has the duty to help people consider themselves as stewards of the land rather than the owners of the land … We must help people to work together cooperatively and in harmony,” wrote the Archbishop.

He thanked Archbishop Emeritus Karl Hesse, MSC, for his unfailing support and example of pastoral zeal. He gratefully acknowledged his priests, consecrated brothers and sisters, the staff at the diocesan offices, the lay leaders and catechists in all parishes, the medical staff in health centres, the teachers in Catholic schools and all the Catholic faithful for their friendship, cooperation and faithful collaboration that made his ministry and work much easier.

Archbishop Panfilo has spent his life as a missionary ready to serve the flock he was entrusted with. His missionary journey began in the Philippines where he has spent 32 years of his life. He spent 23 years in Papua New Guinea, 19 as a Bishop, 9 in Alotau, and 10 in the Archdiocese of Rabaul.

At the farewell, Archbishop-elect Rochus Tatamai was handed over by the faithful of Keviang. He was brought in procession and handed over at a moving ceremony. Archbishop Panfilo welcomed him and invited the people to welcome him with the same love and affection with which they loved and accepted him.

As the sun set, the people gathered for prayer – a fitting way to prepare themselves for the installation celebrations on the next day.  A candlelight procession commenced at the cemetery. It was wonderful to experience a prayerful atmosphere as people sang and prayed for intentions of the church, country, and for the situation of COVID-19 in the world. With candles lit, the entire congregation wound its way to the cathedral, prayerfully reciting the holy rosary and thanked Our Blessed Mother for accompanying them over the years.

The Archdiocese of Rabaul has grown in prayer and spirituality. Prayers on the last day of the novena in honour of the Archangel Michael, patron of Papua New Guinea, and also a prayer for Archbishop Rochus Tatamai were then said by the congregation in a packed cathedral. Right through the novena, the entire archdiocese prayed the novena in every parish, a symbol of the unity of the archdiocese. “Prayer and spirituality are high points of the archdiocese,” said Fr Albert Lenon, SDB. Every morning at the cathedral, the people join the priests in celebrating the daily office before the Eucharistic celebration, while the rosary is recited every evening.

The entire archdiocese has been prepared spiritually for the installation.