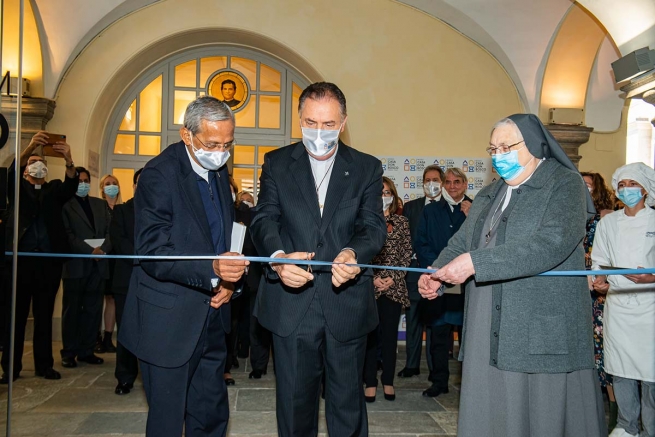 (ANS - Turin) - The 27th General Chapter asked the Rector Major and his Council to take over the Salesian sites and make them something special for the Salesian world. That consignment gave rise to a new reality: the Don Bosco House Museum, which was solemnly inaugurated in Turin-Valdocco with three days of events this past weekend.

Instead of the "Don Bosco's rooms- Camerette", where one could see Don Bosco's presence in Valdocco, today visitors can now get to know Casa Pinardi, the first settlement of Don Bosco's Oratory, in detail. “Here, in these corridors, 11 people have passed that today the Church recognizes as venerable, blessed or saints: this means that Valdocco was a school of humanity and holiness and we want to transmit this heritage to the world,” said the Rector Major, Fr Ángel Fernández Artime at the press conference to present the new museum.

The Rector Major also announced that, to enhance Valdocco as the custodian of Salesian historical memory, the most important documents of the origins of the Congregation will be transferred from the Central Archives to the Don Bosco House Museum.

Also at the press conference, the art critic Vittorio Sgarbi, a past pupil of the Salesian institute in Este, spoke. “There are various types of saints. In many the human dimension is sublimated by canonization, while Don Bosco remains human, it is difficult to call him St. John Bosco ... ” As for the new exhibition “with effective solutions,” he observed: “There are no Tiepolo, Picasso or Giotto, but a story: the story of life, education, books read, holy cards, worship ... ”

The second day, Saturday 3 October, was instead dedicated to institutional authorities. In addition to the Rector Major, Anna Laura Orrico and those responsible for the architectural works and the museographic and museological projects also took part. The rich parterre of prominent figures saw the presence of the Ambassadors of several Latin American countries strongly marked by the Salesian presence, such as Ecuador, Panama, Costa Rica, Colombia, Guatemala, Brazil, Mexico and El Salvador.

Yesterday, Sunday 4, after the Solemn Eucharist presided over by the Rector Major in the Basilica of Mary Help of Christians, the "Don Bosco House Museum" was opened to the public.

“We have tried to represent this long journey of youthful holiness, starting from 1846, inside the Don Bosco House Museum ... The Salesian community of Valdocco is pleased to make this precious pearl available to all of you and the world will testify to the greatness of Don Bosco,” said Fr Cristian Besso, head of the museum project, together with the Director of the Museum, Stefania De Vita.

The Rector Major then carried out the symbolic cutting of the ribbon, flanked by Mother Yvonne Reungoat, Mother General of the Daughters of Mary Help of Christians, and by his predecessor at the head of the Congregation, Fr Pascual Chávez.

Photos and videos of the events are available on ANSFlickr and ANSChannel.